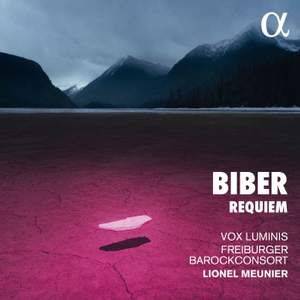 Though there are versions that have a weightier choral sound, the advantage of this one is that the Requiem’s words (which so fuelled the composer’s creative imagination) and all the details... — BBC Music Magazine, May 2021, 5 out of 5 stars More…

Recording of the Week,  Biber's Requiem from Vox Luminis

Lionel Meunier's ensemble explore a time of religious and musical flux in Europe, with an album centred around Heinrich Biber's Requiem and less-heard works by his contemporaries.

The winner of numerous prestigious prizes, including several Gramophone Awards, the vocal ensemble Vox Luminis, founded by Lionel Meunier in 2004, is now regarded as a benchmark in the interpretation of the great works of German Baroque music. Its unfailingly faithful and lively approach to such masters as Bach, Buxtehude and Scheidt has made the group's reputation, but this new recording features a major work by Heinrich Biber, a composer hitherto absent from its discography: his Requiem in F minor for 14 voices, composed around 1692. The programme is completed by two sacred works by Christoph Bernhard (Herr, nun lässest du deinen Diener in Friede fahren and Tribularer si nescirem misericordias tuas), two pieces by Johann Joseph Fux, and the Sonata a 6 in A minor of Johann Michael Nicolai. This recording marks the beginning of a collaboration between Vox Luminis and another internationally renowned ensemble, the Freiburger Barockorchester, heard here in its Consort formation.

Though there are versions that have a weightier choral sound, the advantage of this one is that the Requiem’s words (which so fuelled the composer’s creative imagination) and all the details of Biber’s complex musical tapestry cut through with glassy clarity. Intense but never histrionic, the performance captures the work’s power and its intimacy.

These are rarities on record all right, linked by a rich and serious tone well suited to Vox Luminis’s familiar strengths. It is a pleasure to find Lionel Meunier’s marvellous ensemble devoting time to them.

As ever, Vox Luminis wear their musicology lightly, bringing no less vivacity and expression to these performances than they would to well-known staples of the repertoire.

Beautifully touching performances from Vox Luminis directed by Lionel Meunier with the instruments of the Freiburger BarockConsort. Could easily be a top recommendation for the requiem alone but Biber’s Mass for the Dead is surrounded by music that gives us a fuller picture of the emerging styles of German Baroque music at the time. The recording seems to glow with the same graceful sincerity as the performances.