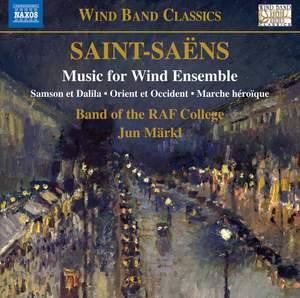 I. Introduction and Royal March of the Lion (Arr. M. Parsons for Wind Ensemble)

Camille Saint-Saëns was involved in every aspect of French music during his long lifetime, and his frequent travels led to a fascinating mixture of Western music with Moorish and African elements in works such as Orient et Occident and the Suite algérienne. Saint-Saëns wrote few works for winds, but the grand biblical themes of Samson et Dalila, patriotic military traditions and the dignity of a British coronation all lend themselves perfectly to arrangement. In The Carnival of the Animals, the roaring lions are superbly evocative; while his perspectives on English and Scottish dances in ballet movements from Henry VIII are brilliantly imaginative. Saint-Saëns only wrote four original works for military band, and he is of course far more renowned today for popular orchestral hits such as the Danse macabre and the Third (Organ) Symphony. This release is a scintillating exploration of Saint-Saënss music, putting famous classics such as The Carnival of the Animals next to less frequently heard marches and dances, all attired with fresh and invigorating new sounds.