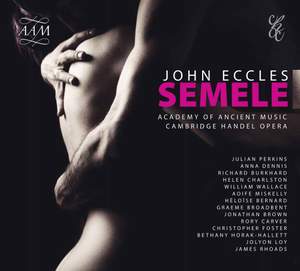 Cast, band, director and sound are all top-notch, restoring Eccles’s score to its full glory...Thanks to Perkins’s deft casting, each principal’s vocalism and dramatis persona are wonderfully... — BBC Music Magazine, March 2021, 5 out of 5 stars More…

Ah Me! What Refuge Now Is Left Me?

See, She Blushing Turns Her Eyes

Alas! She Yields, and Has Undone Me

Why Dost Thou Thus Untimely Grieve?

Such Unavailing Mercy Is in Beauty Found

Ah Me, Too Much Afflicted!

Iris, Impatient of Thy Stay

There from Mortal Cares Retiring

No More, I'll Hear No More

Not One of Curst Agenor's Race I'll Spare

See, After the Toils of an Amorous Fight

Dance of the Zephyrs

O Sleep, Why Dost Thou Leave Me?

Let Me Not Another Moment

Lay Thy Doubts and Fears Aside

Nor Was I Absent

If This Be Love, Not You Alone

With My Frailty Don't Upbraid Me

Thy Sex of Jove's the Masterpiece

Only Love on Sleep Has Pow'r

More Sweet Is That Name

Away Let Us Haste

I Love and Am Lov'd

Behold in This Mirrour

Be Wise as You Are Beautiful

But How Shall I Attain to Immortality?

Thus Let My Thanks Be Paid

Come to My Arms, My Lovely Fair

Tho' 'Tis Easie to Please You

When I Languish with Anguish

I Ever Am Granting

Swear by the Stygian Lake

Then Cast Off This Human Shape Which You Wear

Ah! Take Heed What You Press

I'll Be Pleas'd with No Less

Ah! Whither Is She Gone!

Above Measure Is the Pleasure

Ah Me! Too Late I Now Repent

Apollo Comes to Relieve Your Care

Then Mortals Be Merry (1)

Then Mortals Be Merry (2)

The conductor and keyboardist talks about his recent recording of John Eccles's tragic Semele with the Academy of Ancient Music.

The Academy of Ancient Music, Cambridge Handel Opera Company, Cambridge Early Music and Julian Perkins are proud to present the ﬁrst professional recording of John Eccles’s Semele (c.1707), a notable early setting of the great English libretto by William Congreve better known in a version by GF Handel from 1744. The Academy of Ancient Music’s mission is to explore, reveal and preserve the great treasure house of baroque and classical music, and a spirit of newfound discovery runs through all our work. Eccles’s Semele is the next step on this journey, released here on 2 CDs in deluxe hardback presentation with an extensive accompanying full-colour booklet containing scholarly essays, Stephen Fry’s modern re-telling of the story, autograph manuscript images of Eccles’ score, the full libretto text and much more. A fascinating insight into how opera in England might have developed after Henry Purcell’s death had not Handel moved to London in 1712, Eccles’s Semele is the perfect addition to any baroque-music lover’s library.

Cast, band, director and sound are all top-notch, restoring Eccles’s score to its full glory...Thanks to Perkins’s deft casting, each principal’s vocalism and dramatis persona are wonderfully matched...Charlston’s Juno flares magnificently, unafraid to sound ugly when furious...The Academy of Ancient Music’s playing is just as fascinating. Perkins directs from the harpsichord with a demonic intensity.

Pacing, not least in the expressive recitatives, is fluid and natural, the playing of the AAM strings tingles with theatrical life and the young cast is uniformly fine.

It is difficult to imagine greater justice currently being done to the opera than it receives here...The hero of the performance is undoubtedly Perkins, who conducts as if every bar means the world to him, pacing the work with assurance and drawing splendid playing from the strings of the AAM...All the major roles are outstandingly taken.

There’s fun to be had in comparing Eccles’s response to Congreve’s libretto with Handel’s setting from nearly four decades later (‘Endless pleasure’, for instance, is here a wistfully reflective aria for the lovelorn Athamas rather than a lubricious showpiece for the heroine, and the ‘mighty thunderer’ Jupiter is endowed with rather more gravitas), but the score is a delight entirely on its own terms. Dennis is a sensuous, elegant Semele, and mezzo Helen Charlston positively spits fire as her vengeful nemesis.

Some of the best moments fall to jealous, scheming Juno, whose scenes spring to life more readily than some of the others; the role is dispatched here with brilliant imperiousness by Helen Charlston. The role of Semele herself is beautifully sung by Anna Dennis, and the rest of the large cast is excellent, too. Julian Perkins conducts them and the AAM players in a performance that’s gratifyingly light on its feet.