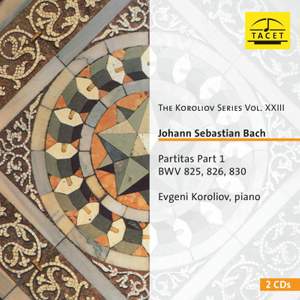 There is one cycle of Johann Sebastian Bach's keyboard works that Evgeni Koroliov has not yet recorded and that's the Partitas. Part 1 is out now with BWV 825, 826 and 830. Because Koroliov takes his time, they don't fit onto one CD, but that's no real loss for the listener. As is often the case with TACET, you pay for one CD but get 2.

Composers such as Ligeti and Kurtg have praised Koroliov's Bach interpretations, as have many reviewers the world over as well as countless listeners. At a time when many people have to live in isolation, separated from family and friends, this music is refreshing to the soul. No tinkling on the keyboard, no drama; instead, reflection and immersion in the beauty of the detail and of the whole. You enter into an intimate dialogue with Bach through the medium of Koroliov and you become completely absorbed in the interaction between these two artists. There's no better way to pass the time.