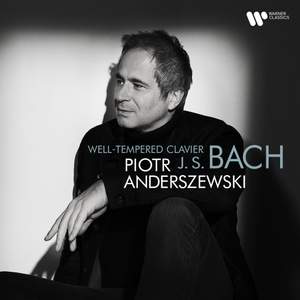 For this listener at least, Anderszewski’s interpretations and juxtapositions have a compelling inevitability; but the other reason for the recording’s success lies in his pianism. Anderszewski’s... — BBC Music Magazine, April 2021, 5 out of 5 stars More…

Piotr Anderszewski takes a characteristically creative approach to Bach’s Das Wohltemperierte Klavier (The Well-tempered Clavier). Rather than recording all 48 of its prelude-and-fugue pairings, he has focused on 12 pairings from Book Two. “I decided to put the pieces together in a sequence of my own subjective choosing, based sometimes on key relationships, at other times on contrasts. The idea behind this specific order is to create a sense of drama that suggests a cycle: 12 characters conversing with one another, mirroring each other.” Anderszewski’s last Erato album of Bach prompted BBC Music Magazine to write: “For anyone who loves Bach (or the piano) … this life-enhancing disc is required listening.

For this listener at least, Anderszewski’s interpretations and juxtapositions have a compelling inevitability; but the other reason for the recording’s success lies in his pianism. Anderszewski’s flexible, responsive touch and his often slowish tempos allow a subtle suggestiveness..The whole set is beautiful from start to finish.

Anderszewski here poses a most intriguing question: what happens when you take a group of 12 Preludes and Fugues from Book 2 of the ‘48’ and intermingle them? The result...is less of a box of Quality Street to be consumed slumped on the sofa and more of an invitation to a cocktail party of great sophistication. Anderszewski says in the note that he perceives them as character pieces and indeed the result has the feeling of a Baroque Carnaval.

This is playing of unadorned purity, shorn of all extra-mural attractions in performances that often transcend even the most exalted names. There is none of Gould’s eccentricity or Tureck’s occasional pedantry...He makes you long for more Bach, or indeed any other great composer. A pianist who offers no concessions, who remains entirely himself, Anderszewski achieves something of Lipatti’s level of exaltation.