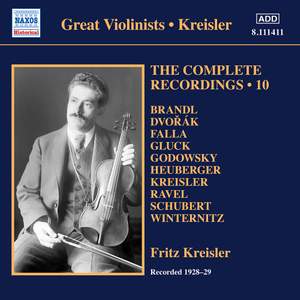 Felix Winternitz: Dance of the Marionette

Kreisler: Rondino on a Theme of Beethoven

No. 4, Songs My Mother Taught Me (Arr. F. Kreisler for Violin & Piano)

"Fritz Kreisler was in his early 50s during the two years covered by these recordings – consolidating his status as the world’s most beloved violinist, touring Italy and elsewhere in Europe, as well as giving notable concerts in Carnegie Hall and throughout the US. The Great Depression and the premature death of his brother Hugo added to personal stresses in 1929, but these recordings, many of which are unpublished tests, reveal Kreisler at his best. In the Sonatina movement written in New York by Dvořák and renamed Indian Lament by Kreisler, we hear the composer’s yearning for his homeland, enhanced by beautiful double-stops. In Ravel’s Habanera, Kreisler’s seductive rhythm is to the fore, while Godowsky’s Nocturnal Tangier is full of North African promise."