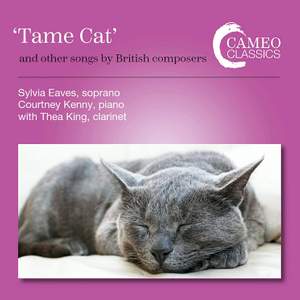 Tame Cat and Other Songs by British Composers

Cooke, A: 3 Songs of Innocence for Soprano, Clarinet & Piano

No. 1, Piping Down the Valleys Wild

No. 3, The Echoing Green

No. 1, Johnny Has Gone for a Soldier

Most of the songs on this record were composed in the first half of the 20th century, not a few between the two wars. This has been an era surprisingly neglected by singers, yet many English composers produced some of their best vocal works during this period. Recently the combination of voice, clarinet and piano has proved more and more popular with composers, but it would appear that with Holbrooke's 'Tame Cat', he must be counted amongst the first of English composers to write for this medium.