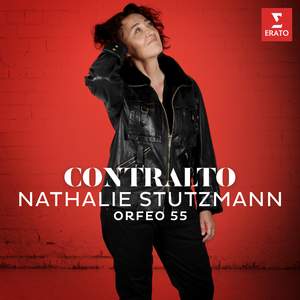 Stutzmann’s deep burgundy contralto, like a freakishly rich, wide-ranging countertenor, is the perfect fit for this repertoire...[Her] characterisation and vocal colouring are always true and... — Gramophone Magazine, March 2021 More…

Contralto Nathalie Stutzmann shines a light on the deep-voiced female singers of the Baroque era, often overshadowed by the extravagant talents and reputations of castrato singers like Farinelli and Caffarelli. Her programme of Handel, Vivaldi, Porpora, Bononcini, Caldara and Gasparini displays the variety of operatic roles – both female and male – assumed by contraltos like Vittoria Tesi and Anna Marchesini. “We must remember that the opera composers of the early 18th century saw the female contralto and the male castrato as vocally interchangeable,” says Stutzmann, “and that the voice most closely resembling a castrato is not the countertenor – produced using a falsetto technique – but the contralto, which is a natural voice.” Stutzmann both sings and conducts Orfeo 55, the instrumental ensemble she founded a decade ago

Stutzmann’s deep burgundy contralto, like a freakishly rich, wide-ranging countertenor, is the perfect fit for this repertoire...[Her] characterisation and vocal colouring are always true and specific. She also dares emotional extremes. You’ll look far to find a more powerful characterisation of ‘Gelido in ogni vena’, voice and ice-cold strings challenging each other to new heights of anguish.

The French contralto is in magnificent vocal form throughout this programme of baroque arias (the coloratura in Porpora’s ‘Torbido intorno al core’ is pinpoint-accurate, and she summons an astonishing range of colours in Vivaldi’s great lament ‘Gelido in ogni vena’), but the real glory here is the earthy, vibrant playing of Orfeo55 – the ensemble disbanded in 2019, with Stutzmann set to move onto pastures new with the Philadelphia Orchestra, and they’ve certainly bowed out with a bang rather than a whimper.