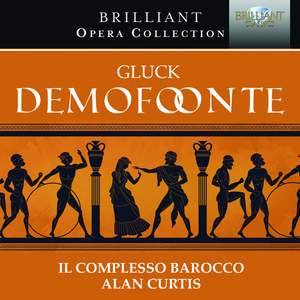 Its distinctive qualities communicate themselves forcefully across large spans of Brilliant Classics’s three-CD set, qualities of vocal and instrumental freshness and rhythmic vitality, of keen... — Opera, May 2021 More…

The first recording of the opera Demofoonte by Gluck!

Gluck was a great admirer of the poet Metastasio and he composed some 20 operas on his texts. Demofoonte, on texts by Metastasio, was composed by Gluck for the Carnival season in Milan, premiered in 1743.

Not one complete score of this opera survived, and Alan Curtis, the American scholar and conductor collected all the surviving arias from different sources, and recomposed the lost recitatives in Gluck-style, taking as a model the opera Ipermestra, which Gluck composed for the following year 1744 and which survived complete.

This wonderful performance was recorded in 2015, one year before the death of Alan Curtis. It is a worthy and touching legacy of the art of this great conductor and his ensemble Il Complesso Barocco, together with a fine line up of international vocal soloists, stars of the Early Music scene

Its distinctive qualities communicate themselves forcefully across large spans of Brilliant Classics’s three-CD set, qualities of vocal and instrumental freshness and rhythmic vitality, of keen dramatic responsiveness to emotional and character depiction and differentiation; indeed, they’ve supplied something of a revelation