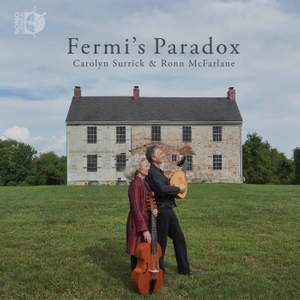 “When I called Ronn McFarlane in January to ask if he wanted to play a house concert in April, he checked his calendar and said, “Sure, sounds great!” Members of Ensemble Galilei… are spread across the country, and we don’t usually get together until right before a performance. But Ronn and I live about twenty miles away from each other, so we started rehearsing. February turned to March in this year of COVID-19. There would be no house concerts. But we kept meeting on Saturday mornings. The dogs, who barked at first, soon came to see Ronn as a member of our extended family… We drank tea, waited for the sticky-biscuits to cool, ate a snack, tuned up, and dug in. It was a few weeks into March when I turned to him and said, “Hey, let’s make a recording in June.” It was a crazy idea. We didn’t have much shared repertoire, at least that hadn’t already been recorded by The Baltimore Consort, Ensemble Galilei, Ayreheart, or Trio Galilei. That meant a huge investment of time and energy. I did not receive a resounding affirmative response. But days passed and the reality of the pandemic settled in. Nothing else was going to be happening this spring. No concerts. No tours. Cancellation after cancellation, with no end in sight. “Yes,” he said, “let’s do this.”