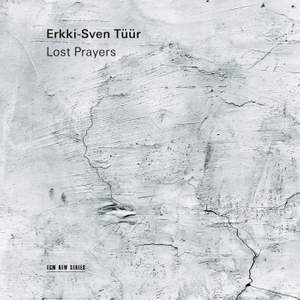 All are delivered with exemplary drive and luminosity: the Signum Quartett respond vividly to the changing textures of Tüür’s imagined Lost Prayers, while Florian Donderer (violin) and Tanja... — BBC Music Magazine, February 2021, 5 out of 5 stars More…

Lost Prayers is the first of Estonian composer Erkki-Sven Tüür's New Series recordings to be devoted entirely to his chamber music. Scaled-back instrumental forces, however, are no indicator of reduced expressive power, and the volatility of Tuur's concept emerges forcefully from the first seconds of Fata Morgana which is, with Lichtturme, one of two pieces for violin, violoncello and piano. These pieces are performed by the Estonian trio of Harry Traksmann, Leho Karin and Marrit Gerretz-Traksmann, all of whom have played Tuur's music extensively and made appearances on earlier ECM discs, including Crystallisatio and Oxymoron. The German-based Signum Quartett plays Tuur's Second String Quartet, Lost Prayers, and Signum violinist Florian Donderer also performs Synergie together with cellist Tanya Tetzlaff. Collectively the musicians underline Erkki-Sven Tuur's view that "one can build up a really rich and wide palette of sounds with only three or four instruments. You don't necessarily need a full orchestra to operate with a powerful soundscape." Erkki-Sven Tüür says of this recording: "Manfred Eicher had wanted to record an album focused on my chamber music works for many years, but it was only after I composed Lichtturme that I felt: now we have a set of pieces we could really release together. This chamber music collection is very important to me. "

All are delivered with exemplary drive and luminosity: the Signum Quartett respond vividly to the changing textures of Tüür’s imagined Lost Prayers, while Florian Donderer (violin) and Tanja Tetzlaff (cello) create pools of colour as they stretch and entwine in the aptly titled Synergie.