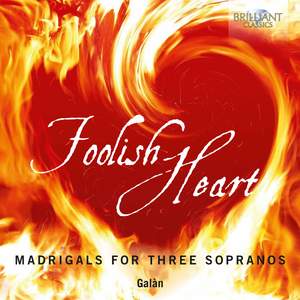 Galàn is a spirited young ensemble committed to rediscovering the exciting and often neglected sound world of three soprano voices and continuo. Specializing in European Renaissance and Baroque music, the group is accompanied by theorbo and harpsichord, and takes its name from the old English term for 'enchantment' and 'to sing'.

The group was originally inspired by the Concerto Delle Donne, a female trio that performed in Ferrara at the end of the sixteenth century. This ground-breaking ensemble led the way in gaining acceptance in Europe for the female voice as a respectable instrument for entertainment, as for centuries women’s voices were not deemed proper for this purpose.

This enterprising program includes works by Mazzochi, Draghi, Monteverdi, Carissimi, Luzzaschi, Frescobaldi, Bartolotti and Rossi. • Ensemble Galàn was founded in 2009 and since winning the Brighton Early Music Festival Young artist they are enjoying an active international career. They have benefitted by the advice and expertise of Sir John Eliot Gardiner and Dame Emma Kirkby.