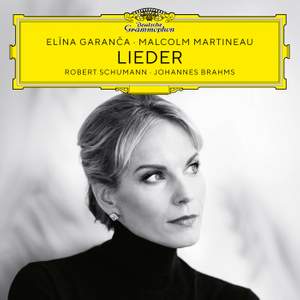 Her rich, strong voice brings welcome maturity to Chamisso’s silly, lovestruck protagonist in the opening song, but sounds matron-like in ‘Er, der Herrlichste von allen’ and others. So, if you... — BBC Music Magazine, March 2021, 3 out of 5 stars More…

The Latvian mezzo talks to Katherine about her first lieder recording (released earlier this month on Deutsche Grammophon, with Malcolm Martineau), and preparing to make her Wagner debut as Kundry...

This album is both a debut and a proof of musical pedigree. After numerous orchestral albums, for the first time Elīna Garanča devotes an entire disc to Lieder in a phase in which the Latvian mezzo soprano triumphs on stage with heavyweight Verdi and verismo arias while essentially on the verge of her first Wagner role

For her first solo recital album, the mezzo soprano has chosen two composers Schumann and Brahms whose works have been with her for many years

The heart of this album is Robert Schumann’s Frauenliebe und Leben op. 42, a musical setting about devotion to love

In addition to the Schumann cycle, on this record she also dedicates herself to a selection of Brahms songs that express very different emotions and moods. Whether in Liebestreu op. 3 no. 1, Geheimnis op. 71 no. 3 Heimweh II op. 63 no. 8 or Von ewiger Liebe op. 43 no. 1

Her rich, strong voice brings welcome maturity to Chamisso’s silly, lovestruck protagonist in the opening song, but sounds matron-like in ‘Er, der Herrlichste von allen’ and others. So, if you can imagine the heroine as a besotted woman in her mid-40s – and why not? – then you will enjoy this performance.

The singing is undoubtedly impressive, the manner redolent of an age where opera and song were less clearly delineated.

Some mezzos — Ludwig, Baker, Fassbaender — dig deeper into the text, but Garanca’s German is beautifully articulated, her tone easy on the ear. In her Brahms selection — including Mädchenlied, Sapphische Ode and the grand finale, Von ewiger Liebe — she and Martineau are perfect foils, as is Brahms for Schumann.