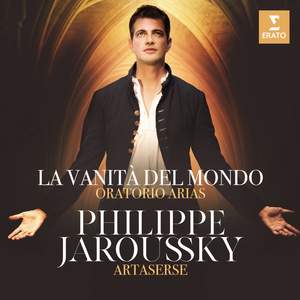 Philippe Jaroussky brings his musical and dramatic powers to a programme of music from Italian oratorios of the baroque era, including five arias in world premiere recordings. La vanità del mondo, takes its name from an oratorio by Pietro Torri and among the other composers are Händel, Scarlatti, Vivaldi, Hasse, Fago and Caldara. “I think composers of this period often give of their best when setting the great stories of the Old Testament,” says Jaroussky. “And if oratorio stories are more static than opera, they allow for deeper reflection on the place of mankind in the universe. I think that resonates with particular intensity in 2020, a year of pandemic.”

Jaroussky’s eternally boyish countertenor might not seem the most obvious vehicle for the Old Testament God’s furious lambasting of Moses in the virtuoso aria from Fortunato Chelleri’s Dio sul Sinai, but the authority of his singing (and of Artaserse’s incisive instrumentalists) ultimately sweeps all before it.