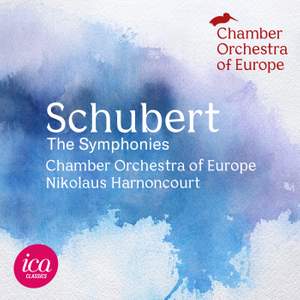 Well known for his deep scepticism and deliberate avoidance of performing tradition, Harnoncourt breathes new life into the music by looking afresh at the sources and encouraging his players... — BBC Music Magazine, February 2021, 4 out of 5 stars More…

This release celebrates the partnership of the distinguished conductor Nikolaus Harnoncourt (1929-2016) directing the Chamber Orchestra of Europe (COE) in a memorable cycle of the complete Schubert Symphonies at the Styriarte Festival in Graz, Austria during July 1988. Harnoncourt was a notable and perhaps controversial Schubertian who, with his favourite orchestra, set about examining everything afresh. The players he worked with in 1988 talk about the way he changed their perceptions, of discovering Schubert’s work for themselves, ignoring the accretions of previous performance tradition. Harnoncourt wanted Schubert’s music to be on the edge, to rebuild it, testing and evaluating the contribution of each instrument and for the players to take as many risks as they wanted.

Well known for his deep scepticism and deliberate avoidance of performing tradition, Harnoncourt breathes new life into the music by looking afresh at the sources and encouraging his players to do likewise. The approach has resulted in readings of pulsating energy whose luminous instrumental textures further enhance our enjoyment.

These brilliantly played performances, caught in a warm, clear acoustic, at their best marry minute precision of dynamics, accentuation and articulation with a devil-may-care spontaneity. With his characteristic balancing of sonorities – lithe, crisp strings, sharply incisive flutes and oboes, unabashed brass – Harnoncourt is forever seeking out the music’s disruptive, discordant elements.