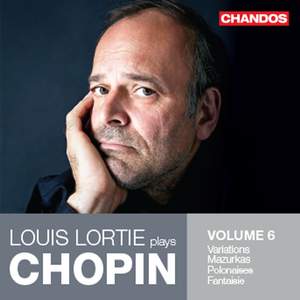 A decade after the start of his Chopin series, for its sixth volume Louis Lortie offers another carefully arranged bouquet, this time dominated by the gentle fragrance of mazurkas...on balance... — Gramophone Magazine, December 2020 More…

For the sixth volume of his Chopin project, the Canad ian pianist and exclusive Chandos Artist Louis Lortie has built a programme that includes works from the earliest to the latest periods in the composer’s life, all of which have connection with or focus on Chopin’s Polish identity. The Hommage à Mozart, Op. 2 is a brilliant set of variations on ‘Là ci darem la mano’ from Don Giovanni. Chopin composed it originally for piano and orchestra, in 1827, when he was just seventeen, and later made this arrangement for solo piano (a common practise at the time). The two Polonaises, Op. 40 date from the late 1830s, and contain some of his most openly nationalistic writing. The first – nicknamed ‘Military’ – evokes sentiments of national identity and pride, whilst the second, more melancholy work portrays feelings evoked by Poland’s vanished statehood. Lortie concludes the album with Chopin’s Fantaisie, Op. 49, from 1841. This work exemplifies the brilliant improvisatory style of Chopin’s writing for piano. These works are interspersed with four sets of Mazurkas, Opp. 6, 24, 41, and 67. Chopin almost single-handedly introduced the Mazurka to Paris when he arrived there in the late 1820s, and contin ued to compose them throughout his life, transforming the Polish dance form into some of his most dazzling and memorable compositions.

A decade after the start of his Chopin series, for its sixth volume Louis Lortie offers another carefully arranged bouquet, this time dominated by the gentle fragrance of mazurkas...on balance this disc is distinguished by the humanistic, selfless music-making, devoid of sentimentality, for which Lortie’s Chopin has justly been praised.

Lortie has a keen awareness of Chopin’s musical journey and increasing sophistication. The solo piano version of the Op 2 Hommage à Mozart is a delight, while the deliciously dark C minor Polonaise Op40/1 holds sudden chords that register as cries of pain. A fine disc.