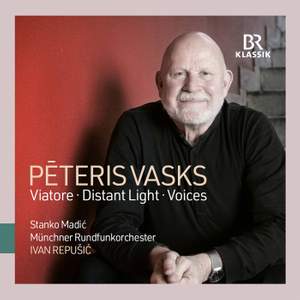 This is a heartfelt, rooted performance of [Distant Light] from the Munich Radio Orchestra and its concertmaster that may well prove a front runner in a field more competitive than that of any... — Gramophone Magazine, February 2021 More…

I. Voices of Silence

"The works on this CD are for chamber-music string ensembles: his first symphony ""Balsis - Voices"" (1991), the haunting violin concerto ""Tālā gaisma - Distant Light"" (1996/97), and the piece ""Viatore” (the traveller; 2001), dedicated to Arvo Pärt, here in a version for eleven solo strings by the conductor, church musician and arranger Stefan Vanselow. The Münchner Rundfunkorchester plays under its chief conductor Ivan Repušić, and the concerto soloist is Stanko Madić, first concertmaster of the MRO. During the critical phase that accompanied the emancipation of the Baltic states from the Soviet Union, Vasks’ symphony ""Balsis"" was commissioned by the Ostrobothnian Chamber Orchestra, and it premiered on September 8, 1991 in Kokkola, Finland. Its three sections are dedicated to the voices of silence, the voices of life and the voice of conscience. - The Concerto for Violin and String Orchestra ""Tala gaisma"", commissioned by the Salzburg Festival, is dedicated to Gidon Kremer, who premiered it with the Kremerata Baltica on August 10, 1997 in Salzburg. It is a sound epic rich in contrasts, with three great virtuoso solo cadenzas, tonal carpets of chords, elements of folklore, and full of dramatic gestures. - Viatore, the tribute to Arvo Pärt that Vasks composed in 2001, describes man in the loneliness of his existence as a restless wanderer - from his arrival in this world to his adolescence, his first love, and his eventual disappearance."

This is a heartfelt, rooted performance of [Distant Light] from the Munich Radio Orchestra and its concertmaster that may well prove a front runner in a field more competitive than that of any other concerto by a living composer. There is a strong sense of narrative sound from Repušić’s orchestra but also from Madic´, whose control of vibrato and tone colour ranges from nervous intensity to still radiance.