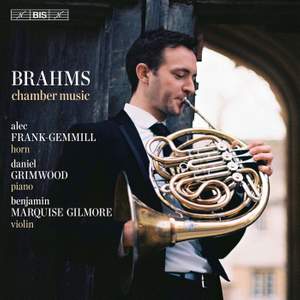 Fascinating to hear new colours in a familiar work, with Brahms’s First Cello Sonata transcribed for French horn. It makes a fine prelude to a terrific performance of the Horn Trio. — BBC Music Magazine, February 2021, 4 out of 5 stars More…

The horn was one of the instruments that Johannes Brahms learned in his youth; his fondness and familiarity with the instrument is clear from the glorious solos that he provided it with in his symphonies, and he gave it pride of place in the Horn Trio that he wrote in memory of his mother Christiane. Even so, he never composed any other chamber work involving the horn – an oversight that horn players have regretted ever since. Following up on two highly acclaimed discs for BIS, Alec Frank-Gemmill decided to rectify this, and enlisted the help of pianist Daniel Grimwood and violinist Benjamin Marquise Gilmore. It goes without saying that the resulting disc includes the Horn Trio – which Frank-Gemmill has chosen to perform on the instrument played by Aubrey Brain on his legendary 1933 recording of the work. But leading up to this are two works originally written for violin and cello respectively. In the Scherzo that Brahms wrote as his contribution to the F-A-E Sonata (which also included movements by Schumann and Albert Dietrich), he finds that the very fabric of the piece is made up of horn calls, while the galloping 6/8 theme reminds him of the final movement of the horn trio. Wanting to also include a sonata, Frank-Gemmill settled on the E minor Cello Sonata, Op. 38 as the one best suited for the horn, and together with arranger Daniel Grimwood the decision was made to transpose the work a third up, into G minor.

Fascinating to hear new colours in a familiar work, with Brahms’s First Cello Sonata transcribed for French horn. It makes a fine prelude to a terrific performance of the Horn Trio.

[Cello Sonata] Frank-Gemmill is much at ease there. In fact, he is much at ease throughout the horn’s range, sounding almost as effortless as that other English horn player, Dennis Brain, although Frank-Gemmill’s tone sounds slightly more brassy to me than Brain’s. Once the listener adjusts to the sound of the horn in place of the cello, the music-making is intelligent and tasteful throughout.

There’s a period-performance flavour to the whole, with Frank-Gemmill performing the Trio on the same instrument upon which Aubrey Brain recorded it in 1933 – originally built as a natural horn although later fitted with a detachable valveblock...In the Trio, the balance of instruments is very satisfying, as is the overall sound: attractively nimble, light and bright.