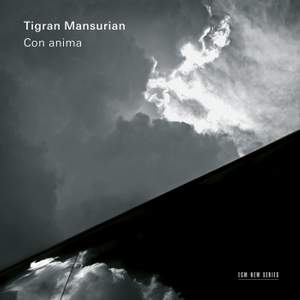 Conceived jointly by violinist Movses Pogossian and violist Kim Kashkashian to celebrate Tigran Mansurians 80th birthday, the Con anima project brings together a dedicated cast of players to perform the chamber music of Armenias great contemporary composer. The emphasis is on newer pieces - only the Third String Quartet dates from the 20th century - but there is a timeless quality to Mansurians work, all of which resounds with the spirit of his homeland. Mansurians works are full of signifiers that come from Armenian ornaments, paintings or stones, writes Elena Dubinets in the CD notes. His music itself feels as if it was carved out of stone. It can seem both ancient and modern at once, as it carefully explores and reveals relationships between contemporary Western composition and Armenias sacred and secular music traditions. Mansurians compositional oeuvre includes orchestral works, concertos for string instruments and orchestra, string quartets, choral music, chamber music, and works for solo instruments. He cites Komitas and Claude Debussy among the composers who have most profoundly influenced his work.