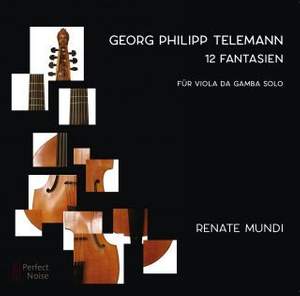 The idea for this CD developed during a recording of the Fantasy No. 7, and quickly established its own momentum. What began as a spontaneous thought experiment soon demanded fulfilment, and morphed swiftly into the desire to take part in the reawakening of this music. What followed was months of intensive dialogue with, and examination of, the 12 Fantasies by Telemann. Having first studied modern cello Renate Mundi discovered her passion for baroque music, and for the viola da gamba in particular. Her enthusiasm for the special characteristics of the instrument, as well as her interest in source studies, including the search for undiscovered scores, was fostered by Prof. Rainer Zipperling, with whom she also studied both baroque cello. Her horizons were broadened further through study with Prof. Hille Perl (gamba) and Kristin von der Goltz (baroque cello). Renate Mundi performs with ensembles and orchestras such as the Johann Rosenmüller Ensemble and the Main Baroque Orchestra. She has worked with, among others, Gabriel Garrido and Michael Schneider, and has appeared on such eminent stages as the Rheingau Music Festival, the Göttingen International Handel Festival, the Alte Oper Frankfurt, and Gothas historic Ekhof Theatre.