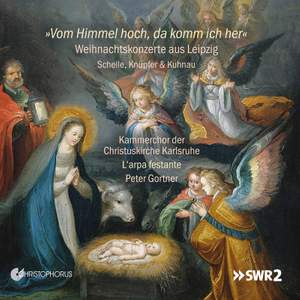 In Leipzig at the Thomaskirche, great music was already being played in the time before Johann Sebastian Bach. Especially for Christmas, exceptionally festive music was written, magnificently staged with a large wind and string instrumentation. The link through the programme with works by Johann Schelle, Sebastian Knupfer and Johann Kuhnau is formed by the chorale "Vom Himmel hoch, da komm ich her", which is heard in all pieces. In the centre is Johann Schelle's "Actus Musicus auff Weyh-Nachten", a 25-minute "Christmas Oratorio" and a model for Bach's later work. The musical climax at the end of the CD is Johann Kuhnau's great "Magnificat", which celebrates the arrival of Christ on earth with kettledrums and trumpets.