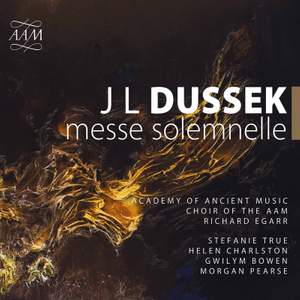 The world-premiere recording of Jan Ladislav Dussek’s magnificent Messe Solemnelle, written for the name-day of Nicolas II, Prince Esterházy, in the early 1800s. A forward-thinking, adventurous composer, Dussek’s music is becoming recognised as some of the most innovative of its time, and this, his last major work, is no exception. A deluxe edition, this album features a 100-page full-colour book packed with scholarship and full sung texts, presented together with the CD in a hard slipcase. Performed here for the first time since composition over two hundred years ago, the Academy of Ancient Music are directed by Music Director Richard Egarr, a champion of Dussek’s music, and joined by a brilliant cast of soloists: Stefanie True, Helen Charlston, Gwilym Bowen and Morgan Pearse. Recorded from a brand new scholarly edition of Messe Solemnelle created by Reinhard Siegert for Richard Egarr and AAM from Dussek’s autograph manuscript score, this album is a first-rate recording of an important piece by one of history’s most unfairly neglected maverick composers.

Dussek himself could scarcely have hoped for a performance as fine as this one, with the Academy on top form, a well-drilled choir of 20 clearly in thrall to Egarr’s infectious enthusiasm for the work and four finely matched soloists imparting plenty of personality...It’s a fascinating work and an important project, impressively recorded, exquisitely presented and enthusiastically recommended.

This superb world premiere recording of Dussek’s late masterpiece will hopefully inspire a few enterprising groups to continue Egarr’s sterling work in putting this glorious piece back on the map – and what a case he and the AAM make for it here, the period brass instruments alternately glowing and blazing, and the choral singers making light of the scintillating fugue of the Credo. Of a fine quartet of soloists, Helen Charlston’s assertive, characterful mezzo stands out, whilst Stefanie True’s perfectly-placed top Cs are a marvel.

Egarr’s enthusiasm for Dussek is infectious and justified by this fine performance from the well-balanced quartet of soloists and superb work from the AAM players and choir. A hugely worthwhile discovery of an unknown work by one of Mozart’s most gifted younger contemporaries.