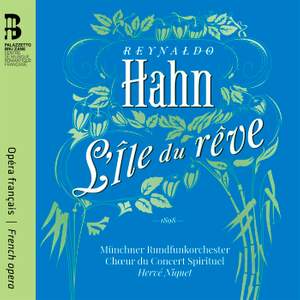 Dubois is a wonderfully ardent Loti, singing with passionate restraint and easy liquidity of tone...The rest of the cast, some of them taking multiple roles, are consistently strong, and the... — Gramophone Magazine, December 2020 More…

"To have written that, you must be a poet", Massenet told Reynaldo Hahn when he read through the score of L Île du rêve. Composed when the young man was not yet eighteen years old, this curtain-raiser already had the qualities of the great works of the period. It reveals the colouristic talents of Bizet, the passionate outbursts of Massenet and even the prosodic originality of the young Debussy. The plot recounts a French naval officer's love affair with a young Polynesian girl he has to abandon. This subject also treated musically by Puccini (Madama Butterfly) and Delibes (Lakmé) is approached in an almost Symbolist style: the Romanticism of the music contrasts with a contemplative, introspective treatment of the narration. This is where the youthful Hahn particularly shines: in the very first bars (the hymn to Bora-Bora), in the various love scenes for Loti and Mahénu (notably the duet Restons encore les paupières mi-closes ) and even in the neo-Handelian prelude to Act Two.

Dubois is a wonderfully ardent Loti, singing with passionate restraint and easy liquidity of tone...The rest of the cast, some of them taking multiple roles, are consistently strong, and the Munich Radio Orchestra sound sumptuous for Hervé Niquet, who presses through the work with quiet urgency; this is a score that would cloy if taken too slowly.

Written when Hahn was still in his teens, his first opera about a French officer who falls in love with a young Polynesian woman is shot through with echoes of Gounod and Massenet (who was an enthusiastic advocate of the work) and includes an affectionate homage to the Bell Song from Delibes’s Lakmé; the young composer’s own nascent voice, though, is already in evidence, with the two gorgeous love-duets exuding the same blend of sentimentalism and sincerity which make his later melodies such favourites.

This exotic “idylle polynésienne” is a rediscovered gem about interracial love, packed with exotic atmosphere and sensuous melody. Niquet conducts stylishly and the soloists, deliciously led by Hélène Guilmette and Cyrille Dubois, are near ideal.