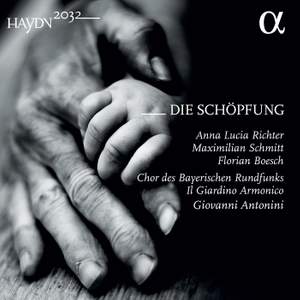 Antonini has a fine line-up of soloists, and they clearly enjoy themselves: the soprano Anna Lucia Richter and the tenor Maximilian Schmidt both have attractively light-toned voices, and Richter’s... — BBC Music Magazine, Christmas 2020, 4 out of 5 stars (Performance) / 5 out of 5 stars (Recording) More…

The Italian conductor makes a slight detour from his project to record all of Haydn's symphonies with an incisive, characterful account of the Creation oratorio.

Giovanni Antonini has been recording the complete symphonies of Joseph Haydn with the Alpha label for more than five years. Now the series is enriched by another monument by the Austrian composer: Die Schöpfung (The Creation), recorded in 2019 with the Bavarian Radio Chorus and his own orchestra, Il Giardino Armonico. This great oratorio was inspired by those of Handel, which Haydn heard performed by very large forces during his visits to England. The Creation, composed between September 1796 and April 1798, demanded such a colossal effort of him that he even fell ill just after its first performance; but the work enjoyed immense success. The marriage between the Bavarian chorus, so familiar with this masterpiece, and the period-instrument musicians of Il Giardino Armonico works perfectly, with a vocal trio composed of leading soloists: Anna Lucia Richter, Maximilian Schmitt and Florian Boesch.

Antonini has a fine line-up of soloists, and they clearly enjoy themselves: the soprano Anna Lucia Richter and the tenor Maximilian Schmidt both have attractively light-toned voices, and Richter’s discreet embellishments are unfailingly musical; while the relish with which Florian Boesch intones a bottom D for the depiction of the slithering worm gets a quiet titter of laughter from the otherwise discreet audience.

Joy is the essence of this new recording from Giovanni Antonini...Based on just 12 violins, his lively orchestra is on the small side. Yet I never felt short-changed…Except for a smartly paced Sunrise, Antonini and his forces never stint on the oratorio’s grandeur…If Antonini can occasionally be brisk to a fault, he catches as exhilaratingly as anyone both the spirit and the letter of Haydn’s unsullied vision

The starkness of the opening Representation of Chaos is laid all the more bare by the pungent, vibrato-free timbre of the violins, clutching and clawing at every dissonance. Blaring horn entries are allowed to overpower when appropriate, whilst Antonini ensures that we register the more "chaotic" elements...Tempos are often sprightly: 'Die Himmel erzählen' has an energy that focuses less on grandeur but instead drives us satisfactorily towards the end of the first part.

In Antonini’s hands the work sounds very different from the first recording I got to know: Karajan’s with the Berlin Phil and starry opera soloists. Tempi and rhythms are zesty — the jumping tiger has never sounded more agile — and the Bavarian choir and German-speaking soloists give full value to Van Swieten’s translation of the English text