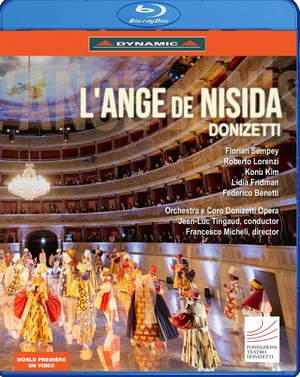 Though the orchestral pacing here is slow at times, the three principals perform with vocal and dramatic commitment. Konu Kim has a light, pure tenor voice expressive of great anguish; baritone... — BBC Music Magazine, January 2021, 3 out of 5 stars More…

Gaetano Donizetti's L'Ange de Nisida was commissioned by the director of the Théâtre de la Renaissance in Paris. The libretto was entrusted to Gustave Vaëz and Alphonse Royer, and the opéra en quatre parties was completed in 1840. Unfortunately the theatre went bankrupt and the opera never reached the stage. Donizetti was aware that other venues would have rejected his work as it stood, for both repertoire and censorship reasons (the plot revolved around the King of Naples, Ferdinando dAragona, and his mistress). Consequently, he revised the score and incorporated a significant portion of it within his new one, La favorite. The autograph score of LAnge was subsequently lost and it is only thanks to the painstaking research of musicologist Candida Mantica that it was brought to light again. She took on the huge challenge of classifying the roughly 470 randomly alternate pages of LAnge de Nisida that had survived at the Bibliothèque Nationale de France in Paris; she re-established their original order and finally managed to reconstruct roughly 97 percent of Donizettis music. The few gaps in the score were judged as irrelevant by both Mantica and Donizetti Opera, so that the opera was considered a complete work in itself, with no need for additions written by other composers.

Though the orchestral pacing here is slow at times, the three principals perform with vocal and dramatic commitment. Konu Kim has a light, pure tenor voice expressive of great anguish; baritone Florian Sempey is a commanding Don Fernand; and soprano Lidia Fridman is a haunted ‘angel’, fragile in stature yet powerful in voice.

The cameras of the filming and the detailed and careful preparation of conductor Tingaud and director Micheli provide viewers of the DVD, through excellent sound and vision, with a more complete visual and aural experience than might have been possible for the real-life audience...Cunningly and efficiently done, both staging and musical interpretation fit the score like a glove. Hugely recommended.

The leading soprano, Lidia Fridman, and tenor, Konu Kim (a Jette Parker alumnus), stand out for the stamina and technical confidence they display, the freshness and lustre of their vocal instruments. Jean-Luc Tingaud, the conductor, can likewise be praised for holding his executants soloistic, choral and orchestral together, no mean feat given their widespread disposition.