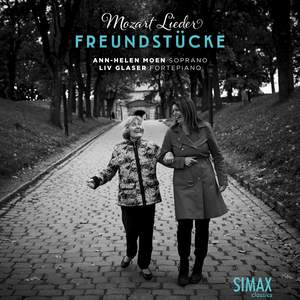 Mozart wrote his songs for performance in private salons with and by music-loving friends, and this album is recorded in that spirit. It would appear that Mozart himself did not put too much emphasis on these songs, published under the title 'German songs for singing at the keyboard' in his own lifetime. But we quickly hear the opera at the ready in this music, and there is little doubt that one genre inspired the other. Many of the best known songs were of course also written in 1787, the same year Don Giovanni was premiered.

Ann-Helen Moen's interpretations of the Mozart's opera heroines has received praise all over Europe. Her Mozart roles includes Donna Anna, Donna Elvira and Zerlina in Don Giovanni, Pamina, Papagena and 1st Lady in The Magic Flute, The Countess in The Marriage of Figaro, as well as Sandrina in La Finta Giardiniera. Moen's career includes the range from Handel to Strauss and Puccini, working with conductors like Ed Gardner, William Christie and Masaaki Suzuki in both concerts and recordings. Ann-Helen Moen studied at Griegakademiet in Bergen and Operaakedemiet in Copehagen, where she worked with Susanna Eken who is still her mentor.

Liv Glaser has, since her debut in 1960, been recognized amongst the elite of Nordic pianists, with countless concerts, broadcasting and TV-performances, touring extensively in Norway, the Nordic countries, Europe, Middle-East and Asia, giving master-classes as well and serving on juries in competitions. Studies in Oslo with Robert Riefling, at Conservatoire Superieurde Musiqe in Paris with legendary Vlado Perlemuter, with Lev Oborin in Moscow and with Ilona Kabos and Wilhelm Kempff. Liv Glaser has been teaching at the Norwegian Academy of Music since its foundation 1973 and became professor in 1994. A sabbatical brought her in1990 to Vienna and lessons with Paul Badura-Skoda as well as studies of Mozart-scores in Salzburg and not the least to Cornell University and Prof. Malcolm Bilson, of invaluable significance to her future musical life. 1992 she started fortepiano-and performance-practise-courses at the Academy and has exceedingly contributed to the growing interest in performance on historical instrument and has since 1992 recorded exclusively on fortepianos. Liv Glaser received in 2018 the order of Commander of St.Olav.