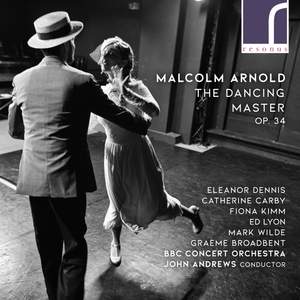 This premiere recording from conductor John Andrews, a vivacious cast and BBC Concert Orchestra is dollops of fun, and more besides. Arnold’s inventive, eclectic score is vividly brought to life...this... — BBC Music Magazine, Christmas 2020, 5 out of 5 stars (Performance) / 4 out of 5 stars (Recording) More…

V. Over the Mountains and Over the Waves

VIII. How Came She With a Dancing Master

IX. I Shall Betray you, I Hardly Know a Step

XI. I Thought the Fool Would Never Leave Us

XII. I Beg You Sir, No Further

XIII. A Volume From the Shelf I Took

XIV. Lucky Miranda, She Has a Handsome Proper Young Man

XV. Miranda… Miranda, Where Are You Miranda?

XVIII. I Am in No Dancing Humour

XX. For a Spaniard – Ring the Bells

The British conductor talks to Katherine about recording Malcolm Arnold's one-act comic opera, written at high speed for TV in the early 1950s but rejected by the BBC for being 'too bawdy'...

"Originally intended as an opera for television, Malcolm Arnold’s collaboration with film-maker and librettist Joe Mendoza, The Dancing Master, Op. 34, was considered too racy for viewers in the 1950s and subsequently rejected for broadcast and largely forgotten. Conductor John Andrews, with the BBC Concert Orchestra and a stellar cast, breathes new life into this operatic gem, here receiving its first recording. With its cast of larger-than life Restoration caricatures – the trapped heiress, the scheming maid, the over-protective guardian, and the handsome rake – the opera showcases Arnold’s taste for exuberant satire and tender Romanticism in equal measure."

This premiere recording from conductor John Andrews, a vivacious cast and BBC Concert Orchestra is dollops of fun, and more besides. Arnold’s inventive, eclectic score is vividly brought to life...this is no dismissible pastiche, but a seriously worthwhile addition to the repertoire.

This performance by BBC forces is ideal. The mostly young cast members sing ardently and with clear enunciation; tenor Ed Lyons as Gerard (the hero) and soprano Eleanor Dennis as Miranda (his sweetheart) add an attractively Mozartean touch. Andrews’s conducting is lively and the sound quality is first-rate.

Here’s a tonic for a melancholy year: a one-act comic opera by Malcolm Arnold, unstaged in the composer’s lifetime and never commercially recorded. Andrews and his collaborators make generous amends in this new recording of what turns out to be an absolute zinger of a score...It all has that bracing, sophisticated freshness so typical of Arnold’s music in the 1950s, and Andrews and the BBC Concert Orchestra sound like they’re loving every bar: letting it be its own vivid, lively self.

It’s hard to imagine anyone putting a better case for the piece than John Andrews and his soloists, led by Eleanor Dennis and Ed Lyon as a mellifluous pair of melancholy lovers.