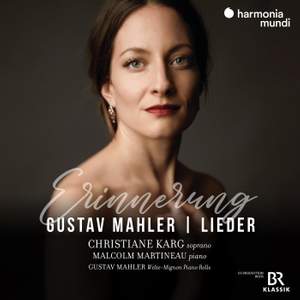 There are no rarities here, but the sequence is thoughtful...And the performance of this recital is magnificent, painting each miniature landscape in generous, vivid detail...The voice sounds... — BBC Music Magazine, January 2021, 5 out of 5 stars More…

Recording of the Week,  Mahler from Christiane Karg, Malcolm Martineau - and Gustav Mahler

The German soprano and her regular recital-partner beguile in the Rückert-Lieder and songs from Des Knaben Wunderhorn and Lieder und Gesänge aus der Jugendzeit, whilst the composer himself makes an appearance (via a 1905 piano-roll) for ‘Das himmlische Leben’.

For her first solo recital on harmonia mundi, Christiane Karg, alongside her faithful partner Malcolm Martineau, presents an incursion into the most intimate aspect of Mahler’s music: the songs from Des Knaben Wunderhorn take us to the heart of the composer’s creative process, as do the songs from his youth and the later Rückert-Lieder.

Two of these pieces (including the famous Das himmlische Leben from Symphony no.4) are accompanied by… Mahler himself, thanks to the achievement of the incredible Welte-Mignon piano rolls which, at the very start of the Twentieth Century, captured his playing far better than any other recording device of the period could.

There are no rarities here, but the sequence is thoughtful...And the performance of this recital is magnificent, painting each miniature landscape in generous, vivid detail...The voice sounds fresh and brilliant, each word charged with meaning. Malcolm Martineau is at his imaginative best, his boundless colouristic range matching or thought-provoking... A treat from start to finish.

Besides perfect diction and enunciation, Karg uses her native German to color the texts with hints of local accents and class distinctions—you really feel the rustic medieval roots of these folk characters. It’s a gift to involve the listener in the words as she does here. Karg is always musical, and she makes each song feel alive. Added to this, in Malcolm Martineau she has a collaborative pianist at the height of his powers.

Karg’s artistry, distinguished by natural intelligence and vivid sense of communication, is an ideal complement to Martineau’s. Her voice is beautiful, more velvety than diamantine, and, with her supremely sensitive partner, she never has need to push it...This is lieder performance of wonderful freshness and intelligence; a delightful album, highly recommended.

In Mahler’s hands, phrases which are usually reassuringly regular and lilting veer off in unexpected directions or are brought up short by a sudden ‘emergency stop’...the eccentric spirit of this final track haunts the entire recital: from the beguiling opening account of ‘Rheinlegendchen’ onwards, I was struck by Martineau’s very liberal use of rubato and pointed off-beat accents as well as some break-neck accelerandos, all of which apparently take their cue from the composer’s own interpretation of the last song

Karg’s clear, bright soprano is better suited to the more pictorial Wunderhorn settings than to some of the more inward-looking Rückert songs, but her singing is always acutely sensitive, and she ends the disc with a fascinating novelty, two songs in which she is “accompanied” by Mahler himself.