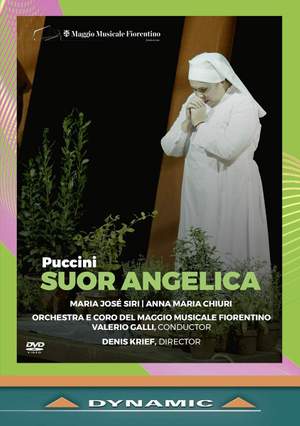 Suor Angelica is one of the three one-act operas that comprise Puccini’s Il Trittico. Of the three, it’s the most lyrical and tragic; it also features an all-female cast. Set in a 17th-century convent near Florence, it tells the tragic tale of a noblewoman who is forced to become a nun to repent the sin of having had a child outside wedlock, thus causing a huge scandal in her social circle. The baby is immediately taken from her, and Angelica is left with no news about him, nor her family, for seven long years. Although seemingly adjusted to the convent’s daily routine – she has become an expert in herbal remedies – Angelica is desperate to hear from her family, but when an aunt finally visits her, Suor Angelica is coldly informed that her son died from an incurable disease two years earlier. The aria Senza mamma (Without Mama) is the tragic peak of both this moment and the whole opera. In her distress, Angelica resolves there is only one option left to be reunited with her child: she proceeds to prepare some poison and drink it. On the verge of death she asks for forgiveness, which the Virgin Mary grants her, appearing with a young boy by her side.

Krief’s austere, angular, copper-coloured set with barred windows provides an appropriately oppressive ambience. The lack of visual distraction ensures our attention is firmly focused where it needs to be: on the tense emotional psychodrama at the heart of what is arguably Puccini’s most devastating work...Siri, with her rich-hued voice and impeccable sense of line, is outstanding in the [title-]role.

Played simply, without undue directorial smartness, Suor Angelica moves us directly and—given Galli’s unsentimental dynamism—deeply. Chiuri’s superb Princess crackles with purpose, her hard-won brutality barely masking twisted tenderness: Angelica’s is not the only shattered life on show. Siri’s heroine is as straight and strong as we’d expect, honestly acted and stirringly sung...Altogether this is a rather special experience.