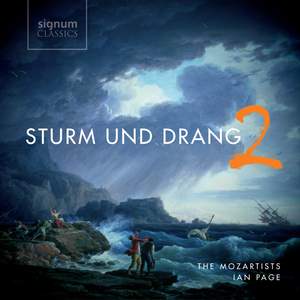 The fierce agitation of the outer movements of Haydn’s Symphony No. 39 certainly exemplify such qualities [Sturm und Drang], just as the dynamic sweep and hair-trigger precision of Ian Page’s... — BBC Music Magazine, Christmas 2020, 4 out of 5 stars More…

This recording is the second in a projected seven-volume series exploring the so-called ‘Sturm und Drang’ movement that swept through music and other art forms between the early 1760s and the early 1780s. In its strictest sense this was an exclusively literary movement which developed in Germany during the 1770s, and which owes its name to the title of a play written in 1776 by Maximilian Klinger. Its general objectives were to frighten and perturb through the use of a wildly subjective and emotional means of expression, and, taking as its model the recently revived and revered plays of Shakespeare, the movement sought to evoke ground-breaking extremes of passion and sentimentality. A leading figure was the young Goethe, whose Sorrows of the Young Werther (1774) anticipated the sombre world-weariness of the next century’s young Romantics, and the movement is generally considered to have reached its peak with Schiller’s play Die Räuber (1780-81).

Not surprisingly, the ‘Sturm und Drang’ movement was mirrored in other art forms; the evocation of fear and terror was reflected in the fashion for storms and shipwrecks in paintings of the period by such artists as Joseph Vernet and Philip James de Loutherbourg, while in music there suddenly, and often quite independently, emerged a profusion of intensely dramatic and turbulent minor-key works. It is interesting to observe, though, that the most concentrated period of musical ‘Sturm und Drang’ actually predated the literary movement, suggesting less a conscious and deliberate ‘movement’ than a latent emotional mood. Indeed, it was perhaps inevitable and natural that there should at some point be a reaction to the superficial charm and gentility of the rococo style of the mid-eighteenth century.

This series of ‘Sturm und Drang’ recordings incorporates iconic compositions by Mozart, Gluck and, above all, Joseph Haydn, but it also includes largely forgotten or neglected works by less familiar names. All of the music featured on this second recording in the series was composed between 1765 and 1770, with three turbulent minor-key symphonies alternating with sacred and operatic arias.

The fierce agitation of the outer movements of Haydn’s Symphony No. 39 certainly exemplify such qualities [Sturm und Drang], just as the dynamic sweep and hair-trigger precision of Ian Page’s players demonstrate their skill and commitment in articulating them...Of the vocal items, delivered with volatile feeling by the Swedish mezzo Ida Ränzlöv, the Gluck arias are troubled and plaintive; more impetuous is a scena by the shortlived Josef Mysliveček.

Page and his players once again demonstrate their total identification with this music in playing of dizzying drive and accuracy. Comprehensive notes by the conductor give not only the musical and historical background but welcome explanations of the dramatic situations of the operatic pieces. Once again, high artistry conspires with scholarship and strength of concept to create a programme that scintillates from start to finish.