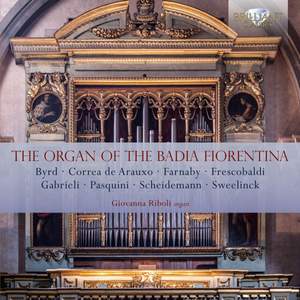 The Organ of the Badia Fiorentina

The organ of the Badia Fiorentina is a famous historical instrument, one of the finest surviving examples of an Italian renaissance organ. It was completed in 1558 by the celebrated organ builder Onofrio Zeffirini from Cortona, Tuscany. In 1978 the organ was restored and returned to its original state, whilst keeping the Trumpet and Cornet stops added by the organ builder Tronci. The characteristically Italian timbre of the organ and its historical temperament (quarter comma meantone 456.6 Hz at 22 ° C) make it the perfect instrument for performing repertoire from the sixteenth, seventeenth and eighteenth centuries.

• The pieces chosen for this recording are by some of the most important representatives of the musical cultures of the time, ranging from Italy to England, via Germany, Holland and Spain. The program includes works by Gabrieli, Frescobaldi, Pasquini, Byrd, Farnaby, Sweelinck, Scheidemann and Correa de Arauxo.

• Organist Giovanna Riboli received her tuition at the Conservatory of Amsterdam, where she also served as assistant organist of the Oude Kerk. In 2015 she was appointed titular organist of the Badia Fiorentina in Florence