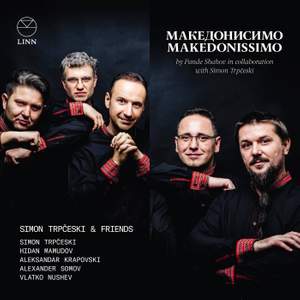 by Pande Shahov in collaboration with Simon Trpčeski

Don’t be fooled by the playful title…[Makedonissimo] is is a serious affair shaped by input from ethnomusicologists and ultimately chiselled into form by a composer. The sound of the kaval and... — Gramophone Magazine, October 2020 More…

The Macedonian pianist talks about his new album, which showcases the folk traditions of his roots in new arrangements for his quintet, composed by Pande Shahov.

MAKEDONISSIMO, meaning very Macedonian ,sees Macedonian pianist Simon Trpceski take a detour from Beethoven and Brahms to celebrate the music of his homeland, Macedonia. Trpceski takes listeners on a joyous tour through the incredible rhythms and haunting melodies of the Macedonian folk music tradition in which highly intricate, jazz-influenced riffs and harmonies are seamlessly interwoven. Inspired by Trpceski's passion for the folk traditions of his homeland, Macedonian composer Pande Shahov (b. 1973), in collaboration with Trpceski created a six movement cycle he called Pletenki (Plaits).

In these new arrangements Shahov merges his own sound world - one which is influenced by impressionist attitudes to resonance and jazz harmony - with Macedonia's traditional music.

Born in Macedonia, pianist Simon Trpceski was a BBC Radio 3 New Generation Artist and was honoured with the Royal Philharmonic Society Young Artist Award in 2003. Trpceski regularly gives solo recitals in New York, Paris, Munich, São Paulo, Prague, Sydney, Beijing, Tokyo and London, where he was recently Artist-in-Residence at Wigmore Hall. He has performed at prestigious festivals including Verbier, Bergen, Baltic Sea and BBC Proms. Trpceski is also a committed chamber musician, appearing with his regular duo partner Daniel Müller-Schott. He is the pianist and founder of the MAKEDONISSIMO Quintet and with the special support of KulturOp works regularly with young musicians in Macedonia to cultivate the country's next generation of artists.

Don’t be fooled by the playful title…[Makedonissimo] is is a serious affair shaped by input from ethnomusicologists and ultimately chiselled into form by a composer. The sound of the kaval and the smoky, prayerful vocals (the singer isn’t credited) are a tonic but it’s the rhythms – and their harmonic by-products – that get you: the additions, elongations and irregularities that wrong-foot ears trained further west.

Listening to this joyous, madcap album from the Macedonian pianist and friends feels like eavesdropping on an uproarious late-night jam-session, but in fact almost everything here is composed by Trpčeski’s compatriot Pande Shahov, and it’s life-affirming stuff, fusing elements of Macedonian folk music, klezmer and jazz with a few gestures toward Prokofiev and Shostakovich in film-music mode along the way.