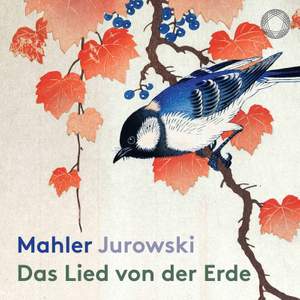 [Connolly] makes the perfect case for pulling the lustrous stops out at each death-transcending release in the ‘Farewell’; Mahler may mark the dynamics at a lower level, but the emotion is irresistible.... — BBC Music Magazine, November 2020, 5 out of 5 stars More…

Residing somewhere between symphony and song cycle, 'Das Lied' is one of Mahler's most profound and loved works, marking an important step in the composer's career, as well as in his private life. Jurowski approaches the piece as Mahler's deliberate move from a 'heroic' Beethovenian model towards a more 'lyrical', Schubertian attitude. Throughout 'Das Lied', and particularly in the contemplative last movement, 'Der Abschied' ('The Goodbye'), Mahler seems to come to terms with the mortality of man while celebrating the immortal nature of life.

[Connolly] makes the perfect case for pulling the lustrous stops out at each death-transcending release in the ‘Farewell’; Mahler may mark the dynamics at a lower level, but the emotion is irresistible. Above all it’s her perfect fusion with the many vocal woodwind solos – every trill and turn strikingly vivid – that places Jurowski’s ‘Song of the Earth’ amongst the greatest.

This is a performance of such distinction that regardless of one’s personal view of the piece...it must be considered a prime contender for anyone’s library...I cannot stress enough how effectively Jurowski conveys the ethereal ‘natural world’ beauty of the score...I cannot imagine a more revealing exposition of Mahler’s instrumental colorations. Everything stands in such sharp relief.

Connolly’s first two phrases in ‘Der Einsame im Herbst’ will engender confidence in any listener. The singing is perfectly poised and the sound of her voice per se is a source of great pleasure. Furthermore, Jurowski ensures that the orchestral accompaniment is ideally pointed.

There’s certainly nothing heroic or elegiac about this performance, no heart-on-sleeve in mezzo Sarah Connolly’s account of that great finale, in which Jurowski shapes the instrumental commentary with meticulous accuracy, while the intrusions of the everyday world in the joyous outbursts of the earlier movements take on a deliberately abrasive quality.