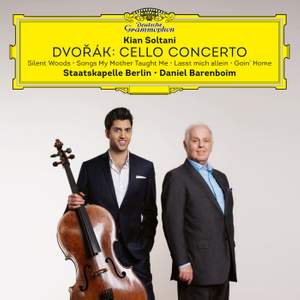 He’s an exceptionally free, agile and fluent player, and youthful impetuosity powers the first and third movements, only occasionally marred by a rather hectic vibrato. There’s a sense of real... — BBC Music Magazine, October 2020 More…

Two years after his successful Deutsche Grammophon Debut Album “Home” Kian Soltani returns with a Dvořák Album featuring the famous cello concerto and five arrangements of some of the greatest pieces Antonin Dvořák composed. Dvořák‘s Cello Concerto op. 104 hasn’t been recorded for the yellow label since 2002 (Mischa Maisky with Mehta and Berliner Philharmoniker).

He’s an exceptionally free, agile and fluent player, and youthful impetuosity powers the first and third movements, only occasionally marred by a rather hectic vibrato. There’s a sense of real partnership with the orchestra, a lovely chamber-like dialogue, the rounded woodwind and brass timbres of the Berliners providing an ideal foil for his brightly-lit line.

The slightly old-fashioned word that kept finding its way into my notes was ‘nobility’...Soltani fills gracefully shaped phrases with eloquent, butterscotch-tinted cello sound. He crafts a lucid, clearly defined and distinctly classical reading, not without humour...Both Barenboim and Soltani husband their reserves of expression, though when they do cut loose they go straight for the heart.

As well as playing in the West-Eastern Divan Orchestra, the young Iranian cellist performs regularly in recital with Barenboim, and it shows: the Concerto comes across here as chamber music writ large, with some especially delicious, almost improvisatory interplay with the Berlin horn and clarinet (both excellent). Soltani’s own arrangements of several Dvořák evergreens for cello ensemble are attractive and unhackneyed, though Stephan Koncz’s transcription of the ‘New World' Largo takes the palm.