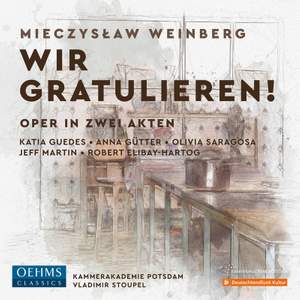 Recorded live at the Berlin Konzerthaus in September 2012, this recording has considerable dramatic presence with all the protagonists delivering characterful portrayals of their respective roles... — BBC Music Magazine, November 2020, 4 out of 5 stars More…

After his move to Moscow in 1943, Weinberg had to face widespread anti-Semitism, both among the population and on the part of politicians. This no doubt encouraged him to compose his opera Congratulations! specifically for the entertainment and edification of the discerning Jewish community in Moscow in the mid-1970s. It is a work full of Jewish topoi that at the same time plays out under the veneer of being Socialist, no doubt to get past the Soviet censors and ensure production. Here, the ‘rich people’ are clearly identified as the enemies and suppressors, and they must be disempowered. The original text for the opera, to which Weinberg himself made only few amendments, derives from Sholem Aleichem (1859–1916), the ‘Jewish Mark Twain’. Today, we are familiar with Aleichem mainly from his short story Tevye the Dairyman, which later provided the material for the musical Fiddler on the Roof. This recording is of a live performance at the Konzerthaus Berlin by the Kammerakademie Potsdam under Vlademir Stoupel, using Henry Koch’s chamber ensemble version of the work.

Recorded live at the Berlin Konzerthaus in September 2012, this recording has considerable dramatic presence with all the protagonists delivering characterful portrayals of their respective roles and Vladimir Stoupel securing incisive playing from the Kammerakademie Potsdam.

Though Wir gratulieren! fails to bring a consistently theatrical quality to the table, it rewards patient listening...The performances are solid, with Anna Gütter in particular making much of the housemaid Fradl’s moments of starry-eyed yearning.