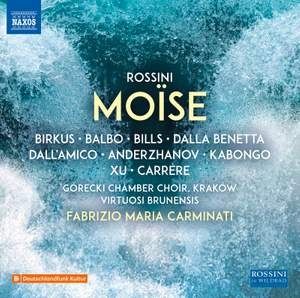 In what is a thoroughly considered performance, Deborah Cachet tackles the role of Alphise with nuanced delicacy while Caroline Weynants matches her nicely as her confidante, Sémire. As Abaris,... — BBC Music Magazine, November 2020, 3 out of 5 stars (Performance) / 2 out of 5 stars (Recording) More…

Following the French theatre tradition for spectacular biblical dramas during Lent, Rossini’s Moïse was an incredible success at its Parisian premiere in 1827, and the opera is presented here in its complete form. Alongside power struggles and miracles, there develops a love story between Pharaoh’s son Aménophis and the Israelite Anaï,

though the main narrative is that of the Exodus from Egypt: Rossini’s riveting score with its spellbinding finales culminates in the parting

of the waves of the Red Sea. In this single work, Rossini laid the foundations of grand opera, and it is widely considered to be among his greatest achievements.

In what is a thoroughly considered performance, Deborah Cachet tackles the role of Alphise with nuanced delicacy while Caroline Weynants matches her nicely as her confidante, Sémire. As Abaris, Mathias Vidal fields a performance founded on powerful, ringing tone...Václav Luks conducts with a combination of style, precision and dramatic impetus.

This latest release from the annual Rossini festival in Wildbad in southern Germany is one of its more successful, and one of its most important...it’s a generally strong ensemble that acquits itself well, a ponderously sung Pharaoh the sole blemish…Key to the performance’s success is the conducting – lithe, buoyant, nicely energised – of Fabrizio Maria Carminati.