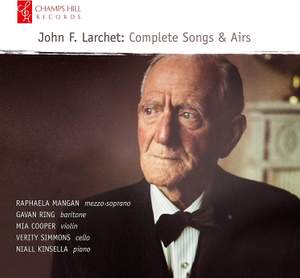 Larchet: The Philosophy of Love

Larchet: Love, and a Garden

II. The Wind that Shakes the Barley – The Flower of Donnybrook

V. Little Brother of My Heart

Larchet: The Bard of Armagh

Larchet: The Song of the Faery Child

Larchet: The Thief of the World

IV. Sail round the Rocks – Don’t leave me alone

Larchet: The Wee Boy in Bed

Pianist Niall Kinsella presents the complete songs and airs of Irish composer John Francis Larchet (1884–1967). This is the first time Larchet’s complete songs have been presented on disc, and many of those heard here are world premiere recordings. Kinsella first encountered Larchet’s songs at university and was keen to find more, but discovered that many of the songs were difficult to access and long out of print. With the help of the Larchet family, Kinsella has gradually collected every song that Larchet composed across the span of his career. Kinsella writes: "I see this project not only as a revival of Larchet’s songs but also as an acknowledgement and celebration of the rich contribution that he has made to musical life in Ireland. Larchet was an integral part of the Irish literary revival at the beginning of the 20th century, writing music for the plays of Yeats, Lady Gregory and Synge, displaying a real skill for building and sustaining drama” Larchet’s marriage of text and music shows the qualities of invention and wholehearted lyricism which characterise his music. Curated by Niall Kinsella (piano), this album features Raphaela Mangan (mezzo-soprano), Gavan Ring (baritone), joined by violinist Mia Cooper and ‘cellist Verity Simmons. His songs are paired on this album with his two sets of Irish Airs for violin and piano. This is the first album to be dedicated to the works of John F. Larchet, showcasing the music of one of Ireland’s most influential musicians.