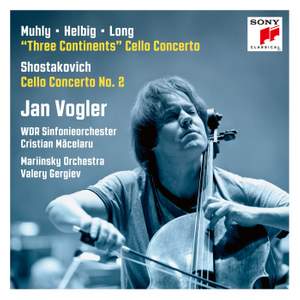 German Cellist Jan Vogler's new album features two modern cello concertos. The first is the world premiere recording of the cello concerto "Three Continents" by Nico Muhly (*1981), Sven Helbig (*1968) and Zhou Long (*1953). Three Continents Cello Concerto is a unique collaborative work celebrating the sheer diversity of three composers from three different continents (USA, Germany, China) and almost three different generations. Each movement of the concerto takes a different view of the role of the soloist: Muhly's Cello Cycles uses the large orchestra to striking effect to create a soundscape full of color. Rather than spotlighting the soloist, this movement features the cello as part of the texture very much as in a Baroque concerto grosso. By contrast, Helbig's Aria opens with a series of atmospheric chords cycling through the lower strings of the cello and highlights the beautiful singing qualities of the instrument. Long's lively final movement, Tipsy Poet, has a more narrative structure based on a well-known Chinese poem and features evocations of Chinese instruments in a colorful soundscape. The result is a fascinating contrasting whole, celebrating musical styles across a vast cultural space. This piece was world-premiered by Jan Vogler with the Cologne Radio Symphony Orchestra (WDR), conducted by Cristian M celaru at the Dresden Music Festival 2019. The second cello concerto on the album is the Cello Concerto No. 2 by Dmitri Shostakovich (1906 1975). Jan Vogler recorded the Cello Concerto No. 2 by Shostakovich with the orchestra of Mariinsky Theater St. Petersburg under Valery Gergiev also during the Dresden Music Festival 2019. Their concerts received great critical acclaim. "Jan Vogler sings with his instrument, full of happiness and enthusiasm, it seems, with admirably flawless technique. One notices how much he is with the music, how he is absorbed in it, how he almost seems to be grown together with his cello." (rbb Kulturradio)

[The three composers are] each assigned a movement, each invoking a different musical landscape, a different musical sensibility – and fierce individuals, each. And yet the wonder is that they sound like they belong, or are destined to belong, together. The unifying force is plainly Vogler himself. His musical personality defines the piece.