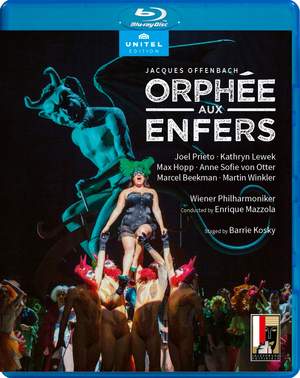 [Kosky's] exuberance is clearly evident...Indeed, sometimes that exuberance spills forth at such a giddy pace that it’s difficult to keep up on initial viewing...Lewek is the star of the show,... — Opera, February 2021 More…

Operetta enthusiast Barrie Kosky has landed a gigantic success with Offenbach’s subversive and hilarious reversion of the Orpheus myth at the Salzburg Festival. Kosky created a magically precise and witty staging with numerous extravagant costumes in a glittering opulent scenery and a literally devilish choreography. For the dialogues he has found an impressively ingenious solution as they are not spoken by the singers. Rather they are performed by the brilliant German actor Max Hopp as John Styx “who performs a true vocal miracle” (Neue Zürcher Zeitung) in a slapstick-like manner. The superb cast impresses with virtuoso singing as well as ravishingly comedic acting, first and foremost the American coloratura soprano Kathryn Lewek as Eurydice “with crystal clear coloraturas and sovereign top tones” (Salzburger Nachrichten), the Swedish mezzo-soprano Anne Sofie von Otter as severe L’Opinion publique or the Austrian bass baritone Martin Winkler as foolish father of the gods Jupiter. Under the Italian conductor Enrique Mazzola’s precise conducting the Wiener Philharmoniker provide an exquisite “sparkling orchestral sound” (Frankfurter Allgemeine Zeitung). “A frantic and fabulous show” (New York Times)

[Kosky's] exuberance is clearly evident...Indeed, sometimes that exuberance spills forth at such a giddy pace that it’s difficult to keep up on initial viewing...Lewek is the star of the show, throwing herself into the role with relish, flinging out top notes at will...Prieto is in lovely voice, making one regret that his character is far from being as important as the title role suggests…Enrique Mazzola draws plenty of fizz from the Vienna Philharmonic.

[Kathryn Lewek] She is endlessly energetic, looks great and sings like a dream. A fabulous performance. Joel Prieto is suitably annoying as Orphée and also embraces Kosky’s concept with gusto – in fact the whole ensemble does, there isn’t a weak link. I cannot recommend this Orphée enough: it is thought provoking, entertaining, controversial and hilarious, and I like to think that Offenbach would approve.