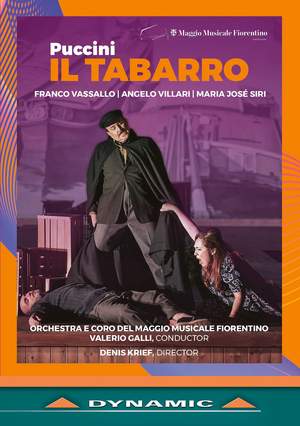 This functional staging is doubtless similar to countless other Tabarros but its lack of glitz and gimmicks forces our attention onto some excellent musical and dramatic performances. Maria José... — BBC Music Magazine, September 2020, 4 out of 5 stars More…

This is a new production from Teatro del Maggio Musicale Fiorentino. Il Tabarro is one of the three one-act operas that make up Giacomo Puccini’s Il Trittico. he element of Didier Gold’s Houppelande that most attracted Puccini was the opportunity to represent a river in music; it acts as a backdrop to the plot and determines its pace. The importance of this atmosphere is enormous, because it is linked to the mise en scène more tightly than is usual. The action takes place entirely on a barge on the Seine in Paris, which takes centre stage. The music describing the river uses a cyclic repetition of ostinato patterns, representing the monotonous flowing of the water, as inexorable as destiny and as regular as the flow of time. In the first part of Tabarro, the pulse of the river represents the life of the downtrodden in this world – longshoremen and boatmen. But even when it disappears, the musical identity between drama and location persists.

This functional staging is doubtless similar to countless other Tabarros but its lack of glitz and gimmicks forces our attention onto some excellent musical and dramatic performances. Maria José Siri is surely one of the best actresses in the opera business and with every flicker of the eye, every facial expression, we feel that we’re watching a real woman rather than a singer playing a role…The Orchestra del Maggio Musicale Fiorentino under Valerio Galli gives a refined performance of Puccini’s highly descriptive score.

Though Krief’s stagings are stronger on general effect than detail, Galli gauges the scores perfectly, giving free rein to Puccini’s lyricism without crowding out the finebrush details of atmosphere and character that make these operas great...Il tabarro makes its point powerfully. At its heart, Maria José Siri’s steely strength embodies the woman stuck between a sour husband and embittered lover.