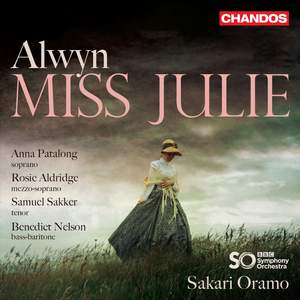 Though not all the musical ideas are equally strong, the finely-crafted result possesses undeniable tension and dramatic potency…The performance itself conveys clear conviction. Anna Patalong... — BBC Music Magazine, August 2020, 4 out of 5 stars (Performance) / 5 out of 5 stars (Recording) More…

You Know Why I Came Here Tonight?

Now You Can Kiss My Hand

That Wouldn't Do, Either

I Have No Time for Dreams

You Don't Know What It Is to Be Poor

But You Can Rise, Jean

She's the Queen of the Dance

You Can Come Out Now

I Know, I Know

I Can't, Not While We're Still in This House

Scum on the Surface of Water

If You Want Me Again

If I Only Had Enough Money

You Sound So Cruel, Jean

Whatever You Say, I Know You Were Here with the Mistress

Class Is Class, and Don't You Forget It

I Knew I Was Right!

What the Devil Is That?

You're Mad! You're Both Mad!

Well, Well! So You're Going to Elope!

I Must Be Dreaming

Kiss Me. Before I Go!

The British soprano and baritone (and real-life couple) discuss bringing William Alwyn's unjustly neglected opera to life last year for a concert-performance at the Barbican followed by a studio recording, released on Chandos last month.

Recording of the Week,  William Alwyn's Miss Julie from Sakari Oramo and the BBC Symphony Orchestra

Real-life husband-and-wife Anna Patalong and Benedict Nelson star in the English composer's 1977 opera, based on Strindberg's great naturalistic drama from 1888.

‘Why has this intense, brilliantly orchestrated, claustrophobically gripping masterpiece been so neglected since its 1977 premiere?’ asked Richard Morrison in The Times of the concert performance in the Barbican that preceded this recording. Miss Julie is Alwyn’s last large-scale work, written in 1973-76. Alwyn set his own libretto, based on Strindberg’s 1888 play of that title. The naturalistic drama and lifelike characters of that play appealed to Alwyn from an early age – in fact, he previously attempted to compose an opera on Miss Julie in the 1950s. That attempt failed, because of differences with his then librettist, Christopher Hassall. Alwyn believed that in opera, the action should be self-explanatory, arias should serve a dramatic purpose (as opposed to sheer vocal display), characters should sing to each other and not to the audience, ensembles should be minimised and the text should be set to vocal lines that reflect natural speech patterns. These views were distilled over his extensive career as a film composer, which taught him that music could do more than establish characterisation, suggest mood, and heighten atmosphere: in some cases it could also communicate the unspoken thoughts of an onscreen character even when these were at odds with what he or she was presenting visually. Sakari Oramo and the BBC Symphony Orchestra support an outstanding cast featuring Anna Patalong in the title role in this acclaimed revival of Alwyn’s neglected masterpiece.

It is sensationally gripping…

There is a highly strung, obsessive streak to the music that could come straight out of Vertigo, and how heartening it is to find an English composer writing with such passion...it is well sung by the two leads, Anna Patalong and Benedict Nelson, and conducted with urgency by Sakari Oramo.

Patalong is a charismatic Julie, delivering her neurotic, angular lines with forebodings of suicidal hysteria, and Benedict Nelson, a late replacement as Jean, matches her with his crystal-clear diction. We need to see this in the theatre.

Alwyn’s gifts as a film composer translate stirringly to opera. The performers capture the work’s chilling immediacy, variously crazed, romantic and seedy, full of dissonant waltz and voluptuous orchestration. The tragic relationship between Patalong’s fervent Miss Julie and Nelson’s serpentine Jean, the valet, is winningly conveyed. Every word of the English libretto (Alwyn’s own) is clear. Highly recommended.

Oramo’s dynamic account crackles with the kind of electricity usually associated with authentic live performance. Anna Patalong’s tones as Julie may not always be pretty, but they’re psychologically honest: this character isn’t playing hostess at a tea party...[Nelson] plays the valet Jean with a brazen authority especially rare for a singer parachuted into the cast at short notice.