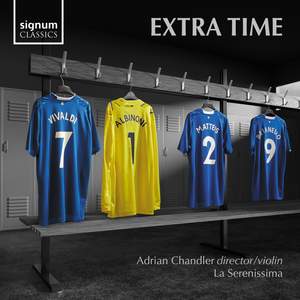 A degustation of Baroque music which, alongside some familiar works by Vivaldi, offers some delightful revelations. Among these is the eclectic G major Violin Concerto by the Bolognese violinist-composer... — BBC Music Magazine, September 2020, 4 out of 5 stars (Performance) / 5 out of 5 stars (Recording) More…

Vivaldi: Concerto for violin, strings & continuo in B flat, RV365

Adrian Chandler talks about his latest album of rarely-encountered Baroque gems with La Serenissima, released this Friday on Signum.

This recording by La Serenissima began life when the ensemble were recording for an earlier release. An issue with budget for a previous release meant these gems had to be left out. Since that release in 2015, La Serenissima have firmly established themselves as one of the leading performing ensembles of Italian Baroque. Following on from their highly acclaimed ‘The Godfather;’ released on Signum last year, this release shows the class act that they are, with these recordings making for one incredible album.

La Serenissima was formed in 1994 for a performance of Antonio Vivaldi’s La Sena festeggiante and has now firmly established itself as one of the leading exponents of the music of eighteenth-century Venice and connected composers. The entire repertoire of La Serenissima is edited by director Adrian Chandler from manuscript or contemporary printed sources, a testament to its vision to enrich life by sharing its passion for Italian baroque music.

A degustation of Baroque music which, alongside some familiar works by Vivaldi, offers some delightful revelations. Among these is the eclectic G major Violin Concerto by the Bolognese violinist-composer Giuseppe Antonio Brescianello…Chandler makes for a most refined soloist in the Vivaldi concertos – his sound delicate, his virtuosity discreet.

The great news is that ‘Extra Time’ is bristling with all the elegantly zesty joie de vivre familiar from those previous albums...while La Serenissima know how to raise a roof with panache, there’s also all manner of softer moments to savour...The engineering is as consistent as the music-making is top-drawer and joyous.