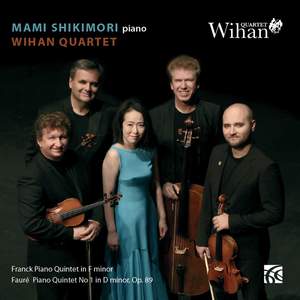 One of the performers’ tasks [in the Franck] is to grade the excitements so that we get some feeling of shape in a whole movement. Here this task is fulfilled admirably, helped by discreet vibrato... — BBC Music Magazine, October 2020 More…

Composed in 1879, the Piano Quintet in F minor by César Franck belongs to the fruitful final period of his creative life. It heralded the start of an impressive sequence of late orchestral and chamber pieces which set the seal upon his career. The Piano Quintet was premiered in Paris on 17 January 1880 by the Marsick Quartet with Saint-Saëns at the piano. During the last quarter of the 19th century and into the 1920s, it was Gabriel Fauré who made the most substantial and lasting contribution to French chamber music. Fauré’s Piano Quintet no.1 renews the powerful concentration of his earlier Piano Quartets in its outer movements, while also looking forward to the composer’s later works in the sophisticated phrasing and chromaticism of its extended Adagio. Vibrant and spirited, it may be counted among the composer’s finest creations. - Paul Conway

One of the performers’ tasks [in the Franck] is to grade the excitements so that we get some feeling of shape in a whole movement. Here this task is fulfilled admirably, helped by discreet vibrato here and there…Fauré’s quartet is less about drama than efflorescence, and in this Mami Shikimori’s attention to the bass is vital…This ensemble is virtually flawless, making intelligible what in less observant performances can become a meaningless jumble.

This beautifully recorded juxtaposition of two three-movement, minor-key, harmonically progressive French masterpieces...makes for a deeply satisfying disc. Both achieve a balance of the string and keyboard forces, avoiding the clatter of an overdominant piano.

[Franck] This is a forceful performance, mature in every sense, and they know how to imbue it with grand passion without lapsing into garish sentimentality. Fauré’s First Quintet is more gentle and the secret here is to catch the harmonic density while keeping the music fluid...this is a disc to savour.