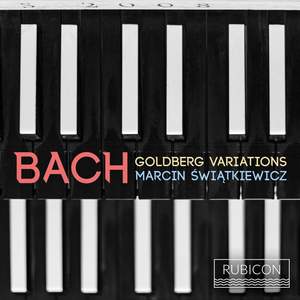 These Goldbergs are full of energy and spontaneity. Swiatkiewicz’s frequent use of the 16-foot stop lends many of the variations a magnificent Thuringian heft. — BBC Music Magazine, February 2021, 4 out of 5 stars

Marcin Swiatkiewiecz is recognisable as the outstanding harpsichordist of the generation. In demand with many of the leading baroque ensembles he has recorded for many labels and for TV and radio around the world.

In 2015 he released his album of harpsichord concertos by Johann Gottfried Müthel which won the Diapason d’Or and in 2017 came the release of the multi award-winning album ‘Cromatica’. His recording of Biber’s Rosary Sonatas with Rachel Podger and David Miller won a prestigious Gramophone award.

For his next album Marcin has turned to one of the supreme masterpieces of keyboard music - Bach’s Goldberg Variations composed in the late 1730s. This work confronts performers with formidable technical challenges and is a supreme example of Bach’s compositional genius and prowess as a keyboard virtuoso.

These Goldbergs are full of energy and spontaneity. Swiatkiewicz’s frequent use of the 16-foot stop lends many of the variations a magnificent Thuringian heft.