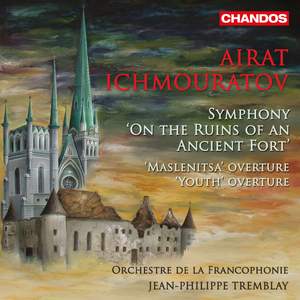 Ichmouratov: Symphony 'On the ruins of an Ancient Fort' & Overtures

You could call this ‘light music’, did it not come armour-plated in the sort of reactionary style you might attribute to minor Soviet composers working in the 1950s…The playing is good, though... — BBC Music Magazine, September 2020, 3 out of 5 stars (Performance) / 4 out of 5 stars (Recording) More…

Ichmouratov: Symphony 'On the ruins of an Ancient Fort'

Our second album of orchestral works by Airat Ichmouratov features three works united by an ear for bold orchestral colour, a dramatic sense of form, and a firm dedication to tonality. The ‘Youth’ Overture was dedicated to the recording’s performers, the Orchestre de la Francophonie and its founder, Jean-Phillippe Tremblay, on the occasion of their fifteenth anniversary, and was premiered in July 2016. The ‘Maslenitsa’ Overture, premiered in 2013, portrays the week prior to Lent and represents an array of carnival-like festivities, including folk dances, disguises, troika rides, ice sculptures, and blini. First performed in 2017, the Symphony in A minor seeks to recreate the vitality of Longueuil, a city on the south shore of the St Lawrence River, from its beginnings as an outpost of New France (only the foundations of Fort Longueuil remain) to the present day. The symphony features Ichmouratov’s trademark descriptive eclecticism – especially in the second movement in which we hear children playing in parks, adults on the street engaged in boisterous debate, traffic noises, and the sound of a trumpet from a nightclub. All three works are world premiere recordings.

You could call this ‘light music’, did it not come armour-plated in the sort of reactionary style you might attribute to minor Soviet composers working in the 1950s…The playing is good, though the string sound, both collectively and individually, is exposed as rather thin in the Symphony.

[Ichmouratov] has lived in Montreal since the 1990s but his musical roots are Russian to the core…The symphony is colourful and descriptive rather after the manner of, say, Kalinnikov or Steinberg, a touch prolix in places...The Orchestre de la Francophonie under Jean-Philippe Tremblay perform it and the overtures more than capably, and with affection.

Listening ‘blind’, I’d have sworn that most of these colourful, melodically memorable orchestral works dated from the first half of the twentieth century, though in fact everything here’s less than a decade old: listen out for cheeky homages to Khachaturian’s Sabre Dance, Fučík’s Entry of the Gladiators and Tchaikovsky’s Overture 1812, and whispers of Rossini and Miklós Rózsa.