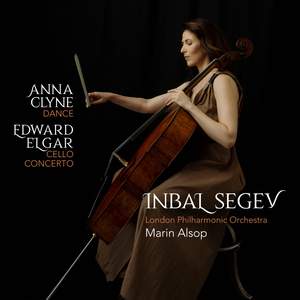 In the final movement of Anna Clyne’s DANCE...a bear-hug of a theme emerges through angry, percussive col legno snaps that is so beautiful, so heartfelt that it instantly drew tears on first... — Gramophone Magazine, August 2020 More…

I. when you're broken open

II. if you’ve torn the bandage off

III. in the middle of the fighting

IV. in your blood

SUMMARY Inbal Segev, together with Marin Alsop and the London Philharmonic Orchestra, performs Edward Elgars Cello Concerto alongside the world-premiere recording of DANCE by English composer Anna Clyne, a work commissioned by Inbal. ABOUT THE RELEASE This formidable release features Inbal Segev performing Elgars emotive Cello Concerto coupled with DANCE, an inspiring new work by Grammy-nominated English composer Anna Clyne that was commissioned by Inbal. On this powerful recording, Marin Alsop conducts the London Philharmonic Orchestra. Marin introduced Inbal to Anna, sparking a special synergy between the three women. While Anna was composing DANCE, a five-movement concerto inspired by the 13th-century Persian poet Rumi, further connections ensued. Annas soulful and vibrant music combines cultures that include her Irish-English family, Polish-Jewish ancestry and Inbals Israeli-American heritage. Inbal expounds, Annas music has an old-soul sensibility but is fresh and modern at the same time. This juxtaposition of old and new has always appealed to me; it suits my playing, as well as the tone of my 1673 Ruggieri cello. Inbals idea to record Anna Clynes DANCE alongside Elgars Cello Concerto is timely: the two works were composed exactly 100 years apart. Inbal enthuses, It is so rewarding to record and perform the work of a contemporary female composer whose music withstands comparison with Elgars. The two pieces share a certain sensibility a romanticism, warmth and humanity that transcends any stylistic differences. Elgars Cello Concerto, written in the wake of World War I, is deeply reflective. Anna Clynes DANCE is optimistic and forward-looking. Inbals recording of these two cello concertos is timeless. ARTISTS Inbal Segev, cello Marin Alsop London Philharmonic Orchestra TITLE Anna Clyne: DANCE Edward Elgar: Cello Concerto

In the final movement of Anna Clyne’s DANCE...a bear-hug of a theme emerges through angry, percussive col legno snaps that is so beautiful, so heartfelt that it instantly drew tears on first hearing…Segev has performed the work a couple of times in concert and plays it here with dark tone and deep insight, closely supported by Marin Alsop and the London Philharmonic Orchestra… Here is a cellist with something to say.

The concerto as a whole is utterly personal, blending musical materials in a way that is entirely Clyne’s own...Dance is the most impressive piece by Clyne that I’ve heard, and it’s an achievement for any new cello work to overshadow Elgar’s concerto, with which it’s paired here. That’s partly because of the intensity of every musical idea in Clyne’s work, all vividly projected by Segev, but also perhaps because her performance of the Elgar isn’t as full blooded as one would like.

Elgar’s concerto, an obvious choice, throbs with passion and heartache, well supported by the London Philharmonic and the conductor Marin Alsop...Jewish elements also feature in an engaging, prickle-free work [the Clyne] that might not supply everything you expect from a concerto, but still gives players and listeners a thoroughly good time.