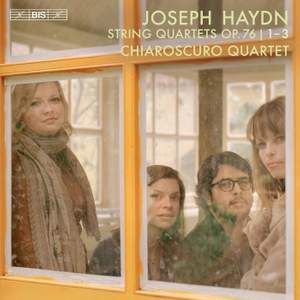 Ibragimova’s gleaming sound bathes the top of the ensemble in sunlight but she’s never more than first among equals...the understated poise and intelligence of the playing deepen with repeated... — Gramophone Magazine, August 2020 More…

The Chiaroscuro Quartet made their first appearance on BIS with acclaimed recordings of Joseph Haydn’s Sun Quartets, Op. 20, described in The Strad as ‘period-instrument performances of the utmost subtlety and refinement’. The Op. 20 quartets are widely regarded as a milestone in the history of the genre. When Chiaroscuros now return to Haydn, it is with his last complete set of quartets, begun in 1796 when he was 64 years old. The Six String Quartets, Op. 76, form one of the most renowned of Haydn's sets of quartets and carry the stamp of their maker: No other set of eighteenth-century string quartets is so diverse, or so unconcerned with the norms of the time. In the words of Haydn’s friend and contemporary Charles Burney ‘they are full of invention, fire, good taste and new effects’. On the present disc, the first of two, we hear the first three quartets, including the ‘Fifths’ quartet (No. 2) so named after the falling perfect fifths with which it begins. The most famous of the set – and possibly of all Haydn quartets – is No. 3, however: the ‘Emperor’ quartet with its second movement: a set of variations on the ‘Kaiserlied’ which Haydn had recently composed to the greater glory of the Austrian Emperor Franz II.

Ibragimova’s gleaming sound bathes the top of the ensemble in sunlight but she’s never more than first among equals...the understated poise and intelligence of the playing deepen with repeated listening...But they know how to smile, too...The overall effect is simultaneously fresh, thoughtful and wholly life-affirming. The Chiaroscuros’ account of the remaining three Op 76 quartets can’t come soon enough.

With the Chiaroscuro Quartet you truly get the best of all musical worlds ... these gifted players relish the expressive potential of their instruments with a bracing instinct for emotional narrative.