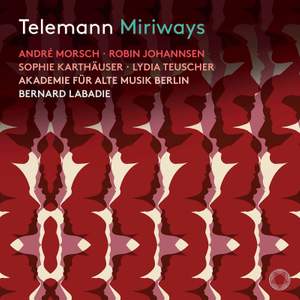 This live recording, with applause, sparkles with life throughout. Musically, it is a piece of considerable melodic appeal. The arias, several of them with Italianate coloratura elements, are... — BBC Music Magazine, August 2020, 4 out of 5 stars (Performance0 / 3 out of 5 stars (Recording) More…

PENTATONE presents Telemann’s rarely-performed opera Miriways (1728) with a stellar cast and the Akademie für Alte Musik Berlin conducted by Bernard Labadie. Star vocalists such as André Morsch (Miriways), Robin Johannsen (Sophi), Sophie Karthäuser (Bemira), Lydia Teuscher (Nisibis) and Michael Nagy (Murzah) offer a string of beautiful baroque arias and scenes in this Germanlanguage opera. Miriways is a piece about love, duty and truthfulness, and was based on political events from that time in Afghanistan and Persia that actually made headlines in European newspapers, demonstrating the eighteenth-century fascination for the Orient. The opera was recorded live during the Telemann Festival Hamburg in 2017.

The Akademie für Alte Musik is generally seen as one of the best period-instruments ensembles of today, and has a substantial PENTATONE discography, including CANTATA with Bejun Mehta (2018), as well as Handel’s Concerti grossi op. 6 (released in 2019 and 2020). Robin Johannsen featured on Handel’s Parnasso in festa (2017). André Morsch, Sophie Karthäuser, Lydia Teuscher, Michael Nagy and Bernard Labadie make their PENTATONE debut.

This live recording, with applause, sparkles with life throughout. Musically, it is a piece of considerable melodic appeal. The arias, several of them with Italianate coloratura elements, are wonderfully varied in character and in instrumental colour…Labadie’s direction is vital and stylish and Telemann gives us some memorable music.

The music is attractive but, on the whole, bland. Once in a while Telemann will do something unexpected...The cast is uniformly excellent...André Morsch brings such authority to the part as the music allows...In the trouser role of Sophi, Robin Johannsen is also heroic, but finds a touching wistfulness in the aria that concludes the second act.

It is indeed rare to encounter such a sizeable cast without a single weak link...The Miriways of André Morsch is notable for the rounded richness of his baritone, while the secondary lovers in the shape of the soprano Lydia Teuscher (Nisibis) and the baritone Michael Nagy (Murzah) are also admirable...Zemir, the bad man of the opera, is strongly projected by the soprano Anett Fritsch, while the baritone Dominik Köninger’s Scandor makes the most of the rollicking drunken scene.