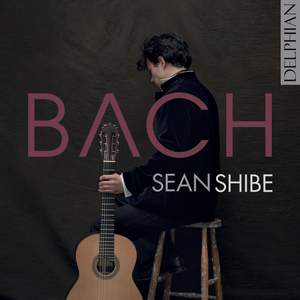 Shibe applies the musical and interpretative qualities that characterise its predecessors – energy, reflection, eclecticism, integration and emotional candour – to remind us that Bach might have... — Gramophone Magazine, June 2020 More…

The eloquent young Scottish guitarist talks to Katherine about his third solo album on Delphian, Pour La Luth Ò Cembal, which was recently described by The Times as 'masterful, beautiful and convincing in every way'.

The award-winning young Scottish guitarist's third solo album on Delphian sees him turn to the music of JS Bach, with a highly varied triple-bill of suites for solo lute.

Three years as a Delphian artist have seen Sean Shibe record music from seventeenth-century Scottish lute manuscripts to twenty-first-century works for electric guitar, picking up multiple editor’s choices and award nominations for each release, as well as the Royal Philharmonic Society’s prestigious Young Artist of the Year accolade.

Now he turns to the music of J. S. Bach, with three works whose obscure early performance history belies their status as repertoire staples for modern guitarists.

The musicological questions that have arisen over what instrument Bach intended for these works – questions encapsulated for Shibe by the phrase ‘pour la luth ò cembal’, which appears in the composer’s hand at the head of the manuscript of the Prelude to bwv 998 – are here answered by the unshakeable assurance of Shibe’s performances.

Shibe applies the musical and interpretative qualities that characterise its predecessors – energy, reflection, eclecticism, integration and emotional candour – to remind us that Bach might have been singular but he contained multitudes…Has the Prelude, Fugue and Allegro [of BWV997] ever sounded so contemporary in its nostalgic sweetness and, in the final movement, sheer unabashed joy?

Through Shibe’s sensitive playing it’s possible to discern the distinct personalities of the relatively youthful composer honing his craft and the mature master at the height of his powers...The guitar is not known for its breadth of dynamic range, but Shibe shows clearly that it is perfectly possible to achieve great sonic variety, both in volume and in texture.

He’s commandingly expressive in slower movements, like the improvisatory opening Prelude of the E minor Suite, BWV 996 and the spacious Sarabandes of that work and the C minor Partita, BWV 997, while the clarity in his articulation of the most complex counterpoints there and in the Prelude, Fugue, and Allegro, BWV 998, is as exemplary as his gloriously warm timbre is alluring.

Shibe reminds us of the sheer intelligence and eloquence of his musicianship. Pliancy, shape, nimble attention to ornaments, clarity in the lines of counterpoint: all make this essential listening.

This astonishing and adventurous guitarist...plays with such depth of tone, colour and intricacies of touch that it is as though he’s at a harpsichord, not strumming or plucking fretted strings...Shibe’s music-making is masterful, beautiful and convincing in every way...Above all, Shibe awes us with the exquisite tone balance across the whole range.