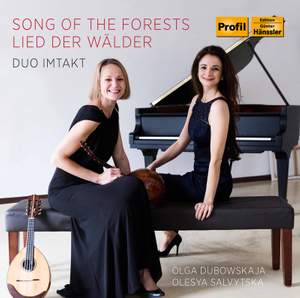 Offer, Song of the Forests

It would take a stone-hearted listener not to be charmed by these arrangements for mandolin or domra (a Russian member of the lute family) and piano. The works are largely familiar, the playing... — BBC Music Magazine, June 2020, 4 out of 5 stars More…

Beethoven: Sonatine for mandolin and fortepiano in C major, WoO 44a

Beethoven: Andante and Variations in D Major, WoO 44b

Tchaikovsky: The Nutcracker: Dance of the Mirlitons

Ivanov, V: Song of the Forests

Tsygankov, A: Variations on 'Mar Dyanda'

"Olga Dubowskaja and Olesya Salvytska, who are from Belarus and Ukraine respectively, have been giving concerts s ince 2005 as DUO IMTAKT. They favour two formation types which are seldom heard in Germany: mandolin & piano and domra & piano. The Neapolitan mandolin has been relegated during the 20th century to the family of folk instruments - despite its remarkable, eighteenth-century Classical past (even master composers such as Mozart and Beethoven wrote works for it). From 1960 onwards, in Germany, the mandolin enjoyed a return to the classical tradition and from 1979 it was possible to study mandoli n at the universities of Berlin and Wuppertal as a main subject. The Domra, a Russian plucked string instrument rich of tradition, took on a sort of mediatory role between the noble arts and the aesthetic demands of the population in the twentieth century. Composers such as Tchaikovsky, Rakhmaninov and Prokofiev were able to place them in a serious context. As the domra became increasingly popular, so professional teaching institutions were created. As a result, there have been music schools and academies in Russia, Belarus and Ukraine for more than 100 years that train artists to play th is instrument."

It would take a stone-hearted listener not to be charmed by these arrangements for mandolin or domra (a Russian member of the lute family) and piano. The works are largely familiar, the playing infectiously enthusiastic.